There are very few things I like about snow.  One would be how beautiful it looks on a moonlit night.  Last night was one of those times.  It’s bright enough outside even past midnight that you can pick out the small details of the tree bark.  I’ve been after Paul to go on a nighttime walk through the woods after a snow when the moon is full.  Going to be a bit more difficult now that Rhiannon’s here, so I suppose I’m going to have to go alone if it’s going to happen this year.
Another thing I like to do after a snow is to look for animal tracks.  Not that there are tons of different types of animals or birds around here (and half of them are our critters), but it’s still interesting to pick out an animal by its tracks and try to figure out what it was doing.  Was it “going” somewhere or just scouting around?  Was it walking or running? 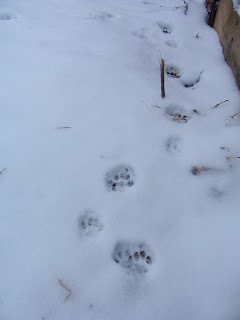 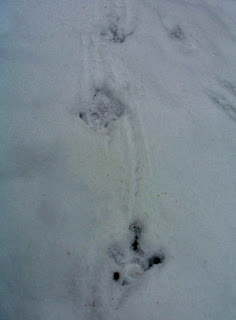 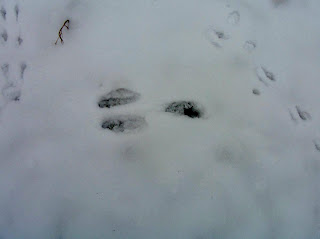 Rabbit and small bird (maybe Junco) tracks
For the life of me, I couldn’t find any deer tracks.  Which I thought was kind’a weird as they are usually everywhere and it’s not like the snow was very deep or that icy.  Maybe they found a good eat’n spot and have camped out there.
The temps aren’t supposed to warm up for several days, so I guess we’ll be stuck with the white stuff for a bit longer.  In the time being, I think Rhiannon & I will work on our numbers and letters.  And maybe work on NOT eating the flash cards.
Posted by Carolyn at 3:02 PM