Among the (almost) Living

It’s officially been a week since I started feeling sick.  I’m still not quite back to normal, but slowly improving.  And thanks for thinking of me fellow blog-addicts!
I think I may have overdone it this past week and made things worse, but as those of you with farms and livestock are painfully aware of, the animals don’t particularly care if you’re feeling under the weather or if the sheer act of putting your shoes on hurts the top of your feet.  They want their breakfast / lunch / dinner and they will let you know if you are even fifteen nanoseconds late.  And I was very slow, and very late with the distribution of foodstuffs the past four or five days.  The only advantage to my illness is that my head cold has made my hearing less than perfect, which means that I didn’t have to hear the goats screaming that they were hungry and would just keel over, shrivel up and die of starvation if they didn’t get their grain like right now.
Sunday evening, Ishtar decided it was time to go into labor.  Her due date was supposed to be Monday, but I was happy to help out a day earlier as Paul was home and able to take care of Rhiannon while I played goat midwife.  Exhausted as I was, I waited inside for some time before going in to the kidding pen with her.  I had the baby monitor on and was waiting to hear some serious labor grunts before I went into the barn.  But as usual, I ended up going in there a bit early as I still sat in the pen with her a good hour & a half before she kidded.  I don’t know why I get so nervous; it’s not like goats haven’t been having kids on their own for the past millennium or so.
Her kidding was uneventful, albeit a bit exhausting on both of us.  She seemed to be having a hard time pushing the first kid out so I figured I should find out if it was presented properly. I gloved and lubed up & went in just far enough to confirm two front feet and a mouth.  I’m a bit concerned that she had a difficult time as I was hoping to have her bred to a Boer this fall, and these were kids from a Nigerian Dwarf buck.  The family that originally bought her from me as a kid didn’t have her bred until her second year, then skipped breeding her the third year, then I got her back and had her bred her fourth year.  So this is really only her second kidding when she “should” have had four.  I wonder if that has anything to do with it.  She also has much smaller teats than her mother Nettie does.  Anyone know if delayed or skipped breedings have anything to do with the way a goat’s teats develop or mature?
Anyways….Ishtar had two kids; a buckling and a doeling and they are doing just fine.  Right after she delivered them, I cleaned and dried them off and called Paul to come take over before I ended up on the floor.  I went inside to clean up and lay down while he tied cords and made sure they had the nursing-thing down path. 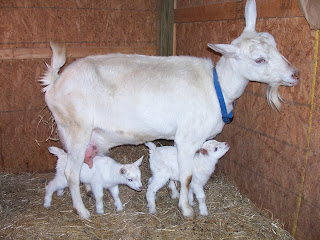 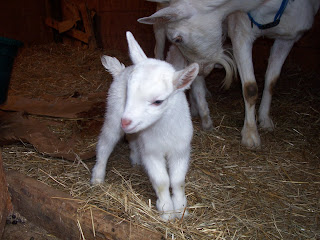 Ishtar & her kids stayed in the barn until Tuesday when it finally stopped raining.  When I opened the door to the world outside and the rest of the curious caprine crew came charging into the kidding stall, there was lots of pushing, shoving and head-butting. Ishtar didn’t want anyone even glancing sideways at her offspring.  Thankfully the moms have all calmed down since then and we once again have happy goat kids jumping around like Jack Russells on Red Bull.
Posted by Carolyn at 7:24 AM