Starting this past Wednesday, the weather has been cooling off; the temperature inside the house had gone down to 61 degrees and I could only put so many sweaters on Rhiannon.  I wasn't chucking logs into the woodstove though, but repeatedly pushing the up arrow button on the thermostat.


Yep, the heat pump.  Not the woodstove.  Because this is where our woodstove was: 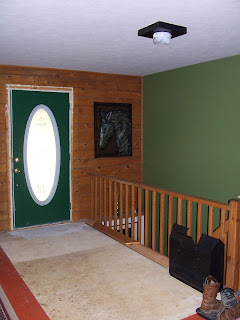 And this is where it is now: 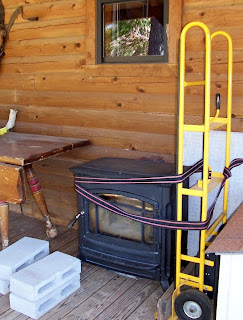 We've finally made some time to start working on the tile floor under and surrounding the woodstove.  When we first bought the stove, we were unsure as to what kind of flooring was going to be upstairs, so we just put some Hardyboard down, four cinderblocks for the legs of the stove and called it "kinda-done".  Honestly, all I cared about at that time was getting the stove up and burning.  But, like any somewhat domestic housewife, the hillbilly-look of it was getting to me.  As was the fact that I've stubbed my toe on the darn cinderblocks at least sixty-three times in the last three years.
So since the weather was cooling off and requiring the use of some sort of alternative heat, we finally decided that it was time to finish the work.  Nothing like waiting until the last minute, hugh?
Of course, nothing is ever easy around here (nor at your place I reckon) so it wasn't just a matter of ripping out the old tile and Hardyboard.  Paul had to take the front door and screen door off in order to raise the threshold so the new tile would fit under the door.  I'll never understand why door-hanging is so difficult, but it took Paul over four hours to finish it.  Not that I'm questioning his carpentry skills, but it just takes sooooo long to hang doors.  Why is that???  Anyways........there was a Sawzall, power drill, air nailer, hammer, pry bar and other miscellaneous tools-of-destruction involved.   Pieces of insulation, long strips of dried caulking, cracked shims, broken screws, sawdust and Great Stuff were seen both inside the house and all over the porch.  What.  A.  Mess.
And all so I could put tile down.  Of course, I was under the impression that I'd just unscrew the Hardyboard (which I did) and then take a pry bar to the old tile and it would lift up, I would toss it out and be done.  Paul is always reminding me how much work is involved in any one of the numerous projects I come up with, but I can never seem to comprehend how much work is actually involved in remodeling until I see him sweating and hear him cussing (and not under his breath) while weilding a sledge hammer.  At that point I am usually making myself as inconspicuous as possible and will occasionally slink over to him during a non-swearing fit and offer him a beer or some other peace-offering.
The doors are hung again (thank goodness or it would have been REALLY cold in here) and the floor is ready for backerboard and tile.  Hopefully I will be doing a post with a "Done" picture in the next few days and I can say goodbye to the heat pump and its monetary addition to our electric bill.
Posted by Carolyn at 6:23 AM