This winter has been very, very mild.  I'd even venture so far as to say it was hot.  Granted it's the end of winter, but it's going to be near 90 degrees today!


Although I have to admit that I've been thoroughly enjoying the warm winter, I'm more than a bit concerned for the fruit trees.  The nectarine trees started blooming almost two weeks ago and the peaches started last week.  Last year's area fruit crop was pretty much a flop, I think for the same reason. There just didn't seem to be enough pollinators up and about yet.  We had a gazillion blooms, but no fruit. 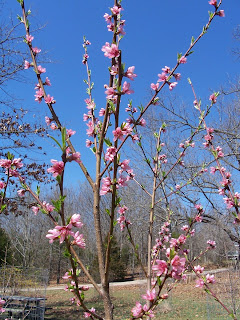 While I was admiring the beautiful blooms of the peaches yesterday I was also looking for bees.  I only saw two bees; they weren't honeybees, but some other kind I have yet to identify.  We normally have a red wasp that I've seen visiting the fruit and vegetable flowers, but they haven't emerged yet.

I suppose I shouldn't really fret too much as our trees are still very young and we were going to cut the young fruits off anyhow in order to let the tree put it's energy into a good root and branch system.  But it is troublesome knowing that just a few short years ago we had honeybees covering the red bud trees and carpeting the patches of clover in the yard.  We stumbled upon a bee tree four years ago, but the following year, they were all gone.  Hopefully they just moved on to bigger and better foraging areas.

Paul, Rhiannon and I were wandering around the property yesterday just before dusk and made our way back to the house and the front yard where the fruit trees are.  And there were hundreds of moths fluttering around the trees!  I though that maybe they were just there because we were there and wanted to annoy us (as many bugs seem to enjoy doing this very thing), but they were visiting the flower blooms!  And not just, "Oh, a moth just so happened to land upon a flower" kind'a thing, but going from flower to flower!

I'm going to try and catch one or two tonight and see if I can identify them just for the heck of it.  Knowing my luck, they are some sort of moth that feeds on nectar and then lay their eggs on a variety of my vegetable plants where the emerging caterpillars will chow down on my potential harvest.

I think I'm also going to start seriously looking into what we need to do in order to get a honeybee colony started, even if it's just for the pollinating services.  And honey would definitely be an added bonus.  Especially given the alternative: