Hopefully one day we will have tons of blueberries and raspberries and blackberries and other sweet goodness in our Berry Garden.


Half of the blueberry bushes were planted just last year, the other half this year. The grapes are also new this year and we still haven't replaced the dead blackberries and raspberries.  And until we can stop the chickens, the occasional onslaught of rabbits (one which recently became dinner, more to come on that later) and wild birds from eating all those few delicious bits of sweetness, we will have to rely on purchasing our berries if I want any cobbler, pie or jam.

This past weekend, both grandmas, Rhiannon and I went to the local berry farm to go berry picking!  The blueberries weren't at their peak ripeness, so we only got a gallon of them.  I'm hoping to go back out there next week and get some more. While the grandmas and Rhiannon were plopping blueberries in the buckets (and stuffing them into their maws), I strolled over to the blackberry patch and quickly filled a gallon bucket.

I only took a few cups of the blueberries for fresh munching and the grandmas split the rest.  The blackberries were huge, but not very sweet, and not squishy-juicy ripe.  But that's just fine because I didn't plan on eating them out-of-hand; I wanted them for making blackberry jam! 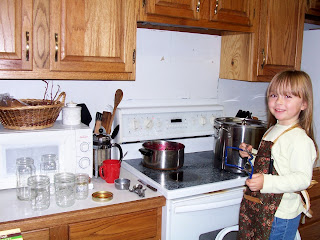 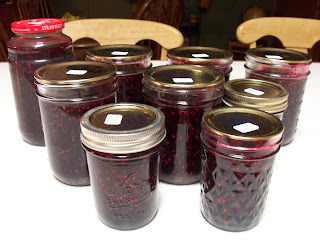 I made two batches; one with pectin the other without.  I opened a jar of the pectin-added jam and it didn't set up as firmly as I would have thought.  Still wonderful on a fresh out'a the oven slice of bread though.  When we finish up that jar, I'm going to see how the jam without pectin set up.  I'm hoping to give a few of these for the holiday season so I want to make sure I give the best ones as gifts.
Posted by Carolyn at 5:58 AM