I noticed that Nettie hadn't been looking very perky the past few days.  She's been just picking at her grain during milking time and had been spending almost every daylight hour underneath the barn, not even venturing out for a handful of sunflower seed treats.  Not that I blame her, the temperature has been in the triple digits.  It's just horrid out there.

Then yesterday, I couldn't get Nettie out from under the barn yesterday for milking time.  I figured I really didn't need to milk her since her milk output has been cut in half for the last few days because of her greatly reduced appetite, but it still worried me that she was refusing to come eat her grain.  She was still parked underneath the barn without the slightest intention of coming out.

When the temps dropped a little during the early evening, Chop Suey and Annette were busying themselves with munching on hay and occasionally giving each other a good head-butt.  I threw some weeds from the garden into the goat pen and they came running over to dine on some fresh greens, but Nettie still wouldn't budge.  And now when I sat down near her, I noticed that she was starting to talk to me in low grunts.  I finally managed to get her out from underneath the barn with some gentle prodding and pulling on her collar.  She walked around a bit, mumbling to herself, but wanted to just lay down again.  I kept her from going under the barn and put her in some grass (dry and crunchy as it was) in the shade.  I went into the house to grab the animal thermometer and took her temperature.  It was 102.7, well within normal goat range (a healthy goat will be between 102 - 103).

After watching her for a while, I noticed that she was nudging her belly every so often.  This last sign made me realize that she probably had a case of bloat.  Bloat is a condition in ruminant animals (cows, goats) and dogs that causes a buildup of gasses in their stomach.  When those gasses cannot escape, the stomach becomes bloated and distended and causes much discomfort as well as a possible emergency situation if left untreated.  Bloat can be caused by several factors; overgrazing on fresh lush pasture, eating something poisonous, eating too much grain (something to look out for if your goats just got into the feed bin and gorged themselves), eating too many legumes.

I started massaging the left side of the stomach (where the rumen is located) and noticed that it was a little harder than normal.  I then pulled her to her feet and made her walk around the yard.  This massaging and walking helps move things around in the stomach and will hopefully get her to burp that extra gas out.  After about ten minutes of walking a very uncooperative goat around the yard, I went in the house to get some common pantry items in hopes of helping: 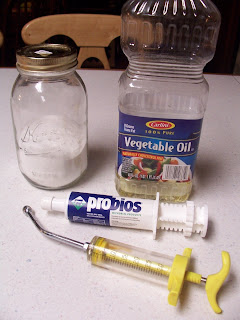 I drenched Nettie with 60 cc's of vegetable oil (about a 1/4 cup) along with a tablespoon of baking soda.  Then we went back to the massaging and reluctant walking.  It was getting dark, and thankfully cooling down, so I left Nettie out in the grass for a while.  I went out to check on her every few hours during the night and massaged her for a minute or so and walked her around the barn two or three times each visit.  I also got about 10 cc's of Probios down her.  The last pre-dawn walk-about she seemed much better and she actually came over to me to see if I had any treats or green things to munch on.

This morning she was up and about and munching on some weeds I threw into the pen, even butting Annette out of the way.  Hopefully everything worked itself out.  This is the third time Nettie has had bloat in the six years we've had her; I've never had problems with any of the other goats.  I'm not sure if Nettie just has a sensitive digestive system or if she manages to get into stuff she shouldn't without my knowledge.  I'm not sure what caused it this time, but I'm sure glad I knew what to do.

Here's a good link for information on bloat in goats if you're interested: http://goat-link.com/content/view/16/29/

So next time you let out a big ol' burp, remember how lucky you are!
Posted by Carolyn at 9:22 AM