For most gardeners, the busy canning season is all but a blurry memory.  And as our gardens haven't produced anything more than a snack, nibble or a few side dishes, I had plenty of time on my hands when everyone else was messing with bands and lids and trying to limit the number of times steam from the canner caused second-degree burns on their bodies.

But my willy-nilly free time is now up.  It's canning time.  It's shutting up and putting up time.  While I only managed to can a few quarts of deer meat, I was determined to get some of our Cornish meat birds in jars rather than in the freezer.  Sunday afternoon I spent several hours dispatching, skinning, eviscerating and cutting up six of the creepy meats.  Then yesterday, Paul and I butchered another five birds, although they retained their skin and will be put in the freezer (Paul is a die-hard roasted chicken fan, not that I blame him, who doesn't like crispy chicken skin?) 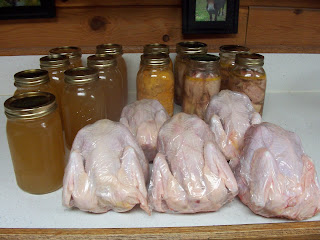 Normally every single piece of the chicken gets used, with the exception of the offal of course.  I just haven't come up with a good Chicken Head Soup recipe yet.  But this year I got lazy (well, sleepy actually) and didn't make the chicken soup/bone slurry and just tossed the leftover contents from the soup pot into the compost heap.  But compost is still good.

I am a bit disappointed in the size of the chickens though.  There was one that was just barely two and a half pounds (whole, dressed).  The first year we raised Cornish, we had several five-pounders.  Then there was one year that they were large, but very, very fatty.  So the next year I didn't feed them nearly as much and the amount of fat they were carrying was significantly reduced.  But this year, there wasn't a scrap of fat on any of them.  Usually there is some fat on their bottoms, but I was pressed to find more than a little blob, if any.  I don't know if I was "starving" them (in my defense, they always act like they are starving) or if I should have been giving them feed with additional protein or if it was just the hatchery chicks or what.  The first year I ordered from Murry McMurry hatchery.  The following years I ordered them from the farm store and they get them from a hatchery up in Missouri.  So now I have to decide where the next batch is going to come from and if I'm going to just shovel feed into their pens 24/7 or use a higher protein feed.  Or maybe even buy some from each hatchery and tag them and see if there is a difference in chick quality.  Which would be a pretty interesting project anyhow.
Posted by Carolyn at 7:35 AM