There's actually not much to review in my latest No Spend Month.  October was officially a bomb.

Between vehicle and homestead equipment expenses, weak-willed trips past the take-out pizza joint,  kid clothing and Halloween candy, it ended up being a pretty spendy No Spend October.  I even gave up tallying the cash outlays after the second week.

So I failed, and pretty miserably at that.  But you know what?  There's always next month.  Or the next, next month.  January sounds like a good time to try again.  There's no way I can even pretend to not spend money during the Thanksgiving and Christmas seasons.  Not that I'll be looking to bust the bank or anything, but let's be realistic.  Although I could possibly kill a wild turkey for Thanksgiving dinner, those French's Fried Onions required for the obligatory Green Bean Casserole just ain't gonn'a pop up in my garden.  And last time I checked, my non-existent mushroom log was still pretty much non-existent and we have to have homemade cream of mushroom soup with Christmas dinner.  A grocery-shopping I will go.

On the livestock front......most of the Creepy Meats are still with us.  But we were down by two before I even started butchering on Sunday.  The first one drowned a few weeks ago because of my stupidity and I went to feed the birds a last week and found another one of them dead.  Not picked at, not decapitated by a hungry opossum, just dead.  I have to get the remaining seventeen birds butchered ASAP.  They are over nine weeks old now, they won't be getting much bigger and I'm sick of spending ten bucks for each fifty pound bag of feed....that they go through in about five days.

I also found one of my homegrown chicks laying by the corner of the barn.  Dead.  And I guess it happened just before I went in the goat / chicken pen as it was still warm and very flexible.  No peck marks, no feathers missing.  Just dead.  That same evening while I was milking, Rhiannon came up to me with a chick in her hands.  As they are usually very spry and mobile, I was surprised that Rhiannon actually caught one.  But when she gave it to me, it was in no mood to flap or run away, it just looked really, really tired.  I put it in a small pen with food and water.  Then next day, it was dead.  Of course, the two deceased homegrown chicks were hens; I'm going to end up with a dozen stinking roosters.  I hope that there's not some chicken pandemic going on in our barnyard.  I don't even know how to treat them as I'm don't know why they are keeling over.  If anymore of them die, I may do an autopsy in an attempt to see what the problem is.

On a happier note, guess who showed up on Sunday afternoon? 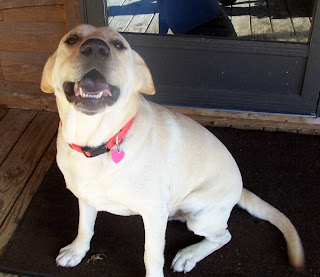 Wallace came back for a visit!  Well, most of him anyhow.  What do I mean by "most" of him?  He had been relieved of his, uhm, manly package and was sporting a new collar with a rabies tag on it!  I'm so glad that he's fixed now.  I was going to bite the bullet and take him to the vet the next time he stayed for a visit, but he hadn't been around for a while.  His fur also seemed a little softer.  The neighbor about a half-mile up the road mentioned occasionally seeing him and feeding him, so I'll have to inquire if it was he that took him to the vet or if his "owner" finally realized that it's irresponsible to let your dog wander without an ID and ultra-irresponsible to let your intact dog wander the county.

Wallace only stayed for a few hours, following me for evening barn chores, running around with Rhiannon and chewing on one of the numerous bones in the yard.  I was happy to see him, and even happier to see less of a particular part of him.
Posted by Carolyn at 8:03 AM