Why'd the Turkey get screwed?

No, it's not a parody of the "Chicken crossing the road" joke, but an actual question.  It seems that for the past several years the general marketing trend has been to go straight from Halloween to Christmas.  The only real reason I can think of for the stores to give turkey day the big one-fingered salute is that they don't make nearly as much money on Thanksgiving as they do on Christmas.

I like Thanksgiving just as much as Christmas and it saddens me that most everyone is in such a rush to brush off the tryptophan-filled family gathering in order to plow headfirst into the holy grail of the holiday seasons. 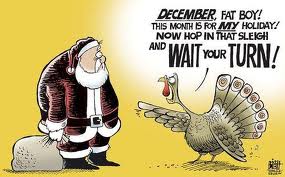 I mean, do we really need to be bombarded with not-so-subtle reminders of the gifts we "have" to buy for our family and friends two months ahead of time?  Not that I'm an advocate of rushing around on December 24th trying to pick that special something for that special someone.  Ever been to a mall a few days before Christmas?  A frekking driving, parking, pushing and shoving nightmare.  And nobody seems particularly happy about having to do all that last minute shopping.  It's more like, "Oh crap, I need to get my co-worker - the one whom I don't care for much anyhow - something for the office Christmas party".

Not only are we buying gifts for people we don't much care for but how many people just end up tossing the first hot cocoa n' mug set or cheap spa gift basket we see into the buggy in order to fulfill the $20 limit on the Secret Santa or family grab bag.  What happened to real gift giving?  Things that may not necessarily cost a lot of money, but come from your imagination and from your heart.  Not that I'm totally knocking gifts that cost a substantial amount of cash, because technically you labored to make that cash, but did you put some time and thought into that gift?

So what got me on this rant?  Besides the Christmas decorations in the stores?  Well, I got a Cabela's Christmas catalog a few days ago.  If you're a regular reader of my blog, you're probably aware of the fact that I'm a cheap skate in regards to damn near everything a lot of things.  And in order to survive on one income, we have to be.  But even if I had, say, an extra $100K a year disposable income, I still don't think I could justify buying something like this for a holiday dinner or a gift:
Fifty-eight bucks a pound for a beef fillet?  And I bet it isn't even one of those Japanese beeves that get the massage special before they get a bullet in the cranium.  So, where did that hunk o' beef come from?  How long ago was it butchered?  Was it pumped with hormones & antibiotics, fed ground up parts of other downed bovines?  If you really want to give someone a special hunk of meat, how about supporting your local organically and humanely raised beef, chicken, pork chops or ham?  If you're in the Illinois area, check out South Pork Ranch (here's their blog, and website, although email Donna for up-to-date prices).

Does anyone actually eat fruitcake nowadays?  It's bad enough if you're the recipient of a five dollar fruitcake that you'll just end up using as a door stop or giving to the chickens, but a sixty dollar fruitcake?   Although if you're a fan of fruitcake, instead of spending sixty-plus bucks on a fruitcake processed "somewhere" why don't you use that money to buy the ingredients (and a bottle or two of wine) and invite a few friends or family members over and have a fruitcake making party?  I bet that the memories from that event will last longer than the overpriced store bought hunk of dried and candied fruit bits.

My favorite though, by far, has to be the forty dollar fruit pies.  Nine inch, not-deep-dish fruit pies, at that.  But maybe I'm being unfair.  Maybe those pies and fruitcakes and frozen cuts of beef are simply the most delicious things to ever come across my pallet, down my throat, through my intestines and out of my........well, you get the idea.  And I guess it's all relative.  If I busted my behind working 60+ hours a week at a six-figure job, I suppose I wouldn't have time to make a pie or fruitcake or whatever and could justify an expense like that.

But since we're a single-income family and I'm a SAHM who is busy scraping animal crap off my boots, collecting eggs or lopping heads off roosters instead of working for a paycheck I'll just have to deal with not being able to give my friends gifts of such high caliber.  The gifts I do give this holiday season will be from the heart, be it homemade or purchased.

And I won't be putting up any Christmas decorations, listening to jingle-bell music nor doing any holiday shopping until after the leftover turkey sandwiches have been consumed.  Sorry Christine!

*I'm not trying to pick on Cabela's.  They are plenty of crazy-insane catalogs out there and honestly, we do occasionally buy things from Cabela's, albeit from their "Bargain Cave".  If you haven't seen their close-outs in the Bargain Cave, go check it out!  There are usually really, really good deals in there.
Posted by Carolyn at 2:18 PM