As many of you may already know, tomorrow is supposed to be the End of The World (dun, dun, dun, DUNNNNNN!!!!) 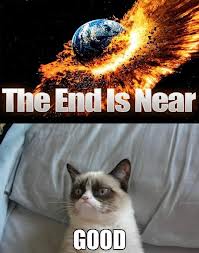 Well, that's what some people claim the Mayan calender says.  Others think that it's just a time of spiritual transformation for humans or some sort of change in the Earth (mass extinctions, plague of locusts, Democrats believing in personal responsibility).

Me?  I just think it's the Winter Solstice.  But who am I to pass up an opportunity to bake some cookies?  Cookies?  Apocalypse?  Hugh?  How does all this add up (as if any of my posts actually make much sense).

Lamb over at Frippery Farm had a grand idea.  Basically, that we should all give TEOTWAWKI a big middle finger salute and bake come cookies!!  Click HERE to see her post.

So tomorrow, instead of cowering in my bunker and sitting on pallets of MRE's, I'll be celebrating The End (or the beginning??  think about that for a while) by making some cookies.