And we have Peeping! Again.

Went into the goat pen just a few minutes ago to see how Nettie is doing.  She didn't want to come out from under the barn this morning (not that I blame her as it's 94 degrees) so I gave her a "You'll come out when you're hungry!!" scolding.  Then when she did manage to grace me with her presence, she wasn't talking like normal.  Kind of a muffled "baaa".

But she's eating hay & moving around, but not as feisty as usual.  Have to keep an eye on her the rest of the day.

Anyways.  While I was in the barn the second (or third) time today, I heard peeping!  Yeah, yeah, I know.  How many hens am I going to let go broody, sit on a clutch for three weeks, then end up either eating her offspring or taking them to unsafe hiding spots at night to be eaten by a predator.

But I was still thrilled to hear peeping!  Just one little peeper as of now, but there are still three or four more eggs under the hen.

Broody #2 was a very good chicken mommy.  There were fourteen or sixteen to begin with.  And then one day last week I saw her off the nest and a bunch of the eggs were gone.  I was about to lop off her head for leaving the clutch & eating eggs, but then got busy with other farmish stuff.  But thanks to my uncanny ability to procrastinate, she was spared.  And then I found out where the eggs really went and why she was off the nest.

After relieving the hen house of at least one slithering, egg-eating reptile, I was still prepping myself for a totally failed hatch as the hen had abandoned her nest long enough for them to get cool.  But I let her sit on the remaining eggs anyhow. 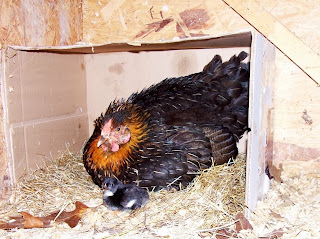 So, was it worth it to give up a month's worth of eggs from her (and another month before she starts laying again) for one measly little chick that is probably a rooster and will end up in the stew pot anyhow?

Paul's Take
No.
It most definitely was not worth it.
I don't want oatmeal for breakfast, I want eggs.
Posted by Carolyn at 1:51 PM