It's 97 degrees on the back porch.  And the thermometer is underneath the roof in the shade and they sky is partially overcast.  Summer is back in full force in the Ozarks.  It looks as if we're going to be in the mid to high 90's until Monday.

I've been having to go back to watering my few remaining squash plants every other day or they get soooooo droopy and lifeless looking.  And today, I'm going to do it.  I'm going to rip out the half-dozen, still alive but barely hanging on summer squash plants.  My fall planting yielded me this: 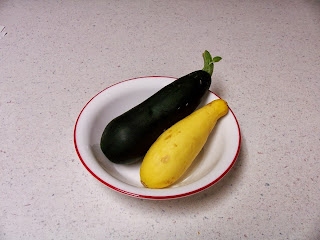 Twelve mounds of zucchini & yellow squash and that was the extent of my summer squash harvest.  The butternut and acorn squash are fairing only slightly better.  We've been getting a handful of cucumbers which are almost immediately eaten and one or two tomatoes every few days.  Just enough to keep our maws busy, but not enough to can.  I keep telling myself that I'm going to put in more green beans and maybe after my second shower today I'll attempt it.  I'm down at the garden watering the winter squash so I may as well water a row of beans.  And hope they don't get tough & stringy like last year's green beans did.

The heat has brought out the horse fly and bald faced hornet swarms.  Poor Charlie will run out from underneath the porch like a banshee, trying to run away from the flying pests and the goats do crazy-mad-tap-dancing-jigs when tied up to the fence during feeding time.  And of course, I'm still battling the bald faced hornets every time I milk.

And speaking of milk, I've started milking Nettie only once a day.  She has such a hard time keeping weight on during milking season and she looks really skinny.  I give her all the grain she wants to eat and even started supplementing her hay with alfalfa pellets, but she just won't plump up.  I plan on milking her once a day for the next month and then dry her up early.  We'll miss the milk, but she's getting up there in age and I need her to be healthy for her pregnancy and subsequent kidding.

I went out to check on the critters just before daybreak this morning and Nettie was yelling.  Not yelling like something was wrong, just one of those "Will you PLEASE shut up already" yells.  So when I milked her this morning I gave her backside a good once-over and her behind was pink. I'm tempted to take Nettie into Herman's pen and "tease" him to see if he's up to the task because he has yet to show any interest in Pickles or Lily and he needs to preform his one & only manly goat duty or he'll be preforming Icecapades in the deep freezer.

I wouldn't let Herman actually breed Nettie because I'm wanting at least one more dairy doeling out of her before she enjoys her retirement and I've got my eye on a Nubian buck for Nettie's date night.  My attempts at getting someone with a Saanen buck to breed her have been totally unsuccessful so we're going to borrow a buck from a friend.  And cross my fingers for a doeling out of Nettie.  For .......Snubian babies!  You know.  Saanen + Nubian = Snubian!  Get it?  Hugh?
Nevermind.
Posted by Carolyn at 2:58 PM