Well, not really "free" as there was bartering and a little bit of labor involved, but it didn't cost a single dime. 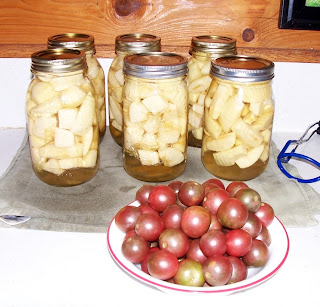 I canned six quarts of apples in a light syrup this morning and still have another six or seven quarts to go.  These were freebie apples that Paul went to pick last week.  And he said that there are more trees just filled with apples.  About half of them are just too small and green to process, so I've been looking up apple cider, and hard apple cider recipes online.

Too bad we don't have a pig to feed all this "wasted" goodness to.  The chickens are more than happy to help get rid of it though.  But we're almost out of pork in the freezer so I've been having pig dreams lately.

I also traded our goat milk for some some produce (you know, because my garden pretty much sucks) this weekend.  And in one of my bags-o-goodies were a bunch of dark red/purple cherry tomatoes.  I didn't think much of it when I opened the bag, but when I finally got around to popping one in my mouth, I was pleasantly surprised.  And proceeded to pop about a dozen more in my maw.

They are wonderfully sweet!  And according to the person who brought them to me, are very, very prolific.  He said he's had to toss about half of them this year because he doesn't know what to do with them and nobody to really give them to.  He said his four plants got 12-15' tall and put on several hundred tomatoes per plant through the season and actually had to rip out some of the volunteer plants this spring to make room for the others!

Of course, I totally forgot about saving seeds so I just now started (he said they are a heirloom).  Now I have peach pits and black cherry tomato seeds to put on my Blogging Buddy Seed Swap!

Oh, and those of you who are still awaiting your package of peach seeds.....I'm sorry.  I'll try to get them out in the mail this week.

Don't forget to save your seeds!
Posted by Carolyn at 12:53 PM