Well, not really cleaning per se (sorry Mom), but cleaning out some of the stuff that has accumulated in the freezer, fridge and counter tops.

We've been making our way through the pork in the freezer (and we're down to just sausage now...I want to cry!) and each supper brings something new from its frozen depths.  Don't get me wrong, I love having a huge chest freezer, but that does mean that there is stuff (what is in that package anyhow??) that gets buried, no matter how organized we try to be.

One of those packages turned out to be a young deer that Harley decided to chew on.  I had originally thought that it was goat, but since we didn't have any wethers to butcher last year or this year, I figured it was the deer.  Guess that's what I get for not properly labeling freezer items.  Regardless what it was, it was coming out of the freezer and I was going to eat it. 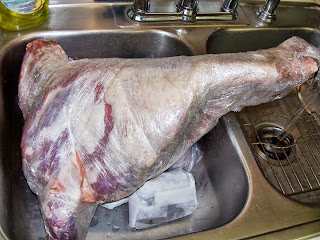 I put the deer/goat/whatever in the sink to defrost for the day and then popped it in the oven at 300 degrees for four hours.  It was a late night because of the defrosting, cooking time and the subsequent picking apart of the meat, but well worth it.  I was snacking on some tender, delicious, lip-smacking venison at 1:15 in the morning.  We'll have the venison for supper for a few days (BBQ sandwiches, dumplings & gravy or maybe a "shepherds" pie) and I put some back in the freezer for last minute heat & eat meals.

Then on Sunday I had to deal with two overripe bananas, three not-as-crispy-as-they-should-be apples and two zippy bags filled with frozen carrot pulp left over from a juicing kick.  I made some impromptu whole wheat banana apple muffins and carrot sunflower seed muffins.  Stuck most of them in the freezer for quick "Mommy, I'm hungry" snacks and to put in Paul's lunches during the week.  Which kind of defeated the purpose of cleaning out the freezer now that I think about it.
I still have going-to-rot-if-I-don't-get-to-them pears to make into more pear jam, some jalapeno peppers to pickle, two gallons of milk to make into cheese and then I'll be caught up for the next few days.
Posted by Carolyn at 5:47 AM