I Dream of Fence

Fence, fence, fence.  It's a homesteader's constant want, need and chore.  When we bought this place, there was a decade's old barbed wire fence that had once surrounded about 3/4's of the perimeter of the land.  What posts that haven't become termite food or downed by falling trees aren't worth a lick, and the wires that were strung from them are buried underneath composted leaf litter, intertwined with greenbriars, snapped and wrapped into convenient ankle breaking and tripping hazards along the way.  In other words, that old fence is nothing but a hazard and another project in itself.

We originally had about a 3/4 acre five-wire electric fence for the goats.  Then the ice storm of 2009 took that out so we switched to a "temporary" cattle panel fence, but their browsing area had been greatly reduced.  We (meaning Paul) have been adding on to the panel fence so it's much larger than what we started with, but we now have many more goats than what we started with and the area, even though greatly increased, is still not adequate.
Not only are we unable to rotate paddocks (because there isn't room to) but they really need to be off that part of ground to help reduce the parasite load.  Paul has been working on a larger, permanent pasture area for the goats and Ms. Melman (the mule) but it's slow going because of his lack of help from yours truly and the fact that every stinking corner and line post takes an inordinate amount of time to break through the boulders riddling our land.  I'm hoping that by Summer the posts will all be in and we he can start installing the fence.  We decided to go all-out (i.e. Cha-ching!) and bought Red Brand Goat & Sheep fence.  It's a 48" high web wire with 4" squares and will eliminate not only the problems of the goats getting their horns/heads stuck in the fence, but will keep the smaller goat kids IN and hopefully keep any predators OUT.  That will solve our goat fencing problem, but it doesn't solve our garden fencing problem.
Even if we didn't have the chickens to scratch, peck and destroy my gardens, there's still the deer to contend with.  Although Charlie seems to keep them away if he sees them, most of the time he doesn't see them as he's snoozing on the porch.  Paul put up a permanent fence around my berry / grape / whatever garden two years ago and that has been very helpful in keeping what berries & vegetables that did grow on our plates instead of in the munching maws of the local wildlife. 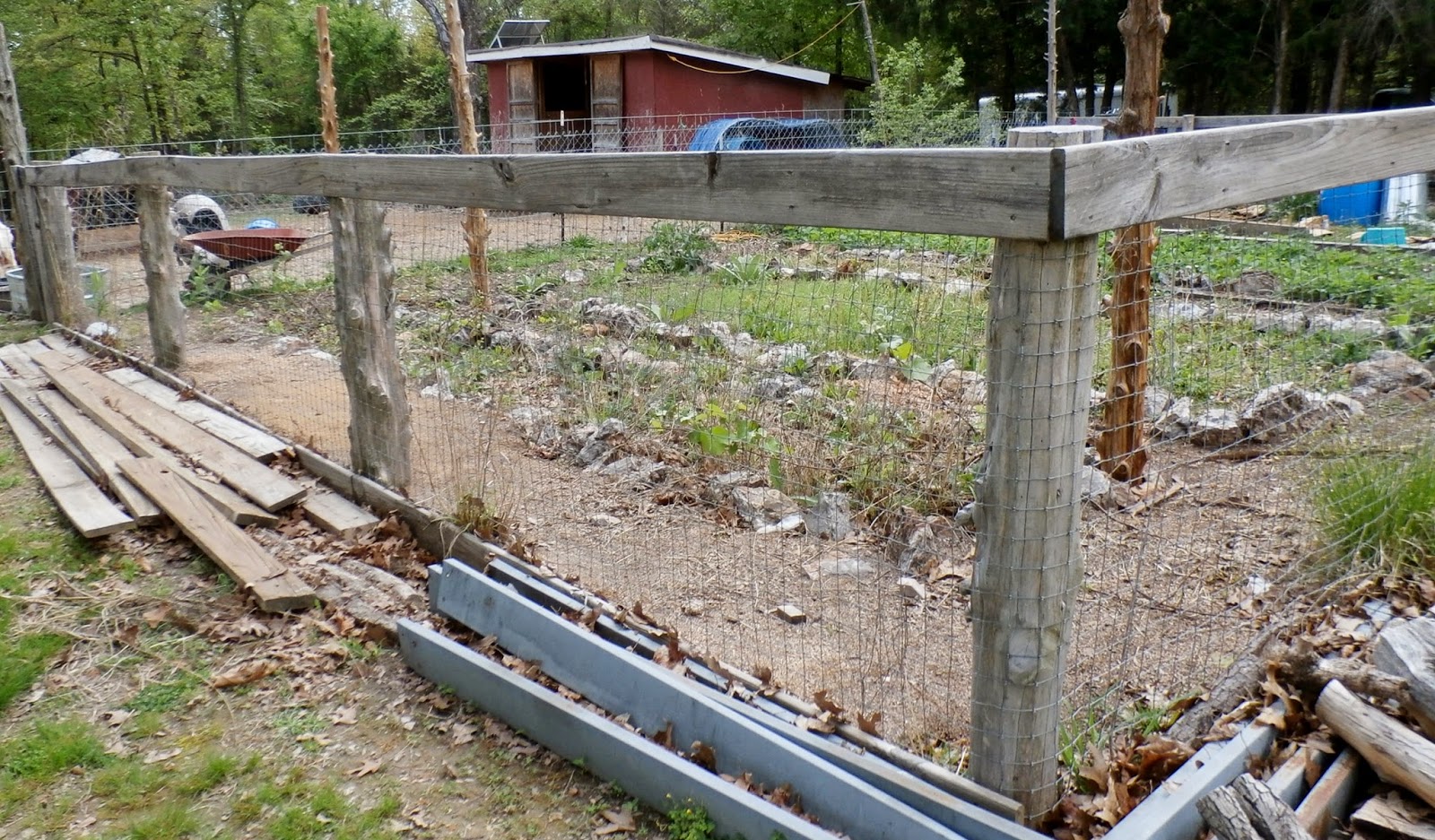 I'm hoping to have a small picket or waddle fence put around the raised beds and herb garden in the front yard, not only for protection from the chickens and deer, but for the simple fact that I think it would be nice to look at.  I've always wanted a little secret garden and I think Rhiannon would really like being able to "hide" out in her own little garden area.

Even after the pasture fence for the goats and mule is finished and the gardens are fenced in, there's still the job of fencing off the property.  We've had the property lines surveyed and marked and we know our neighbors are in agreement so it's just the "simple" job of dozing the entire 4,600-odd feet of line, driving almost 600 t-posts into bare rock and stringing whatever fence we decide on.  One day. Hopefully before I'm dead.  Or before Paul keels over from exhaustion.
Posted by Carolyn at 8:29 AM