Although we're not one of those families that spend lots of money on superfluous items (because in all honesty, we don't have lots of money to do so), 2014 has caused the family pocketbook to flatten out significantly.  The most recent expense being us finally starting the remodeling of one section of the kitchen.  In October, one of the electric elements on the stove went out.  Paul tried to fix it, but it ended up we'd have to buy a $100+ dollar element....for a fifteen year old stove.

So I did what any other frugal person would do; I limped along without the large element.  First World problems, I know.  It wasn't much more than a minor inconvenience until I realized that we wouldn't be able to use the pressure canner.  Even with the large element functioning, the canner took forever to get up to heat/pressure, and now I didn't even have that.  So Paul did what any loving husband would do.  He told me to pick out a new stove.  I hemmed and hawed about it for a while longer.  I had a hard time justifying paying $500 on a new stove.  And then I eventually caved in and picked one out.  One that was twice as much as I originally complained about.  Yep.  You read that right; we spent a grand on a new stove.  But I managed to justify the additional expense because 1) it has a larger element (3,000 watts vs. the old 2,400 watts),  2) a fifth "warming" element, and my favorite by far, 3) it was a double oven.
Yep.  Not one, but TWO ovens in the same convenient (although significantly more costly) package.  I could bake six, SIX! sheet cakes in that baby if I wanted to.  Six pans of lasagna or six pies or six quiches or nine loaves of bread.  All.  At.  Once.  And I could now also cook two different dishes at different temperatures.  And the new range would be able to hold not one, but TWO pressure canners at the same time.  I just cut my pressure canning time in half!  Oh yeah, I also bought myself a second pressure canner two months ago.  I told you we were spending money like it was going out of style.

Now that I've finished gloating over my new stove, let's get back to the 2014 excessive spending spree.  The kitchen remodel not only included a new stove, but a new microwave for above the stove which replaces the one that died, oh, say four years ago.  We also bought an 8' long section of butcher block to replace the counter section by the stove as the laminate was peeling and the edges had long been torn off.  Then we needed some sort of back splash for behind the stove / fridge, so we bought that.  And I almost forgot about the little butcher block / cabinet / moveable island thingy I bought last month.  If I had to sum up the last two months of our finances it would be "Cha-Ching!"

Yes, they were things we've been meaning to buy but kept putting off.  Yes, there are things that we saved some money on like buying a slab of butcher block instead of a custom counter top and using non-conventional back splash material for the wall (pics to follow soon).  But it's hard to ignore the outflow of cash.

So we had a family meeting a few days ago, Rhiannon included, and we talked about how we all needed to find ways to avoid spending money and how we could make better use of the items we already had.  The trips to town would be slashed to save fuel costs.  The freezers and pantry would be utilized more and the grocery store would be visited less.  Eating out would have to be saved for a special occasion (not because I was lazy, was in town, and the "Hot Pizza" caused my vehicle to turn into the parking lot).  And if you think about it, these are things we should have been doing all along anyhow, but have strayed from the path of frugalness.

I'm not going to call this our New Year's Resolution, or make it into a challenge like the "No Spend Month" we tried to do on occasion.  It will just be our S.O.P. for a while, and that's just fine.

Besides, good things can come from squeezing everything you can out of something. Today's brunch was a prime (and yummy) example:
After pressing out the crust for the quiche, there were two small balls of dough left.  I had Rhiannon roll them out, sprinkle them with cinnamon and sugar, cut up an overripe apple and made little apple pies: 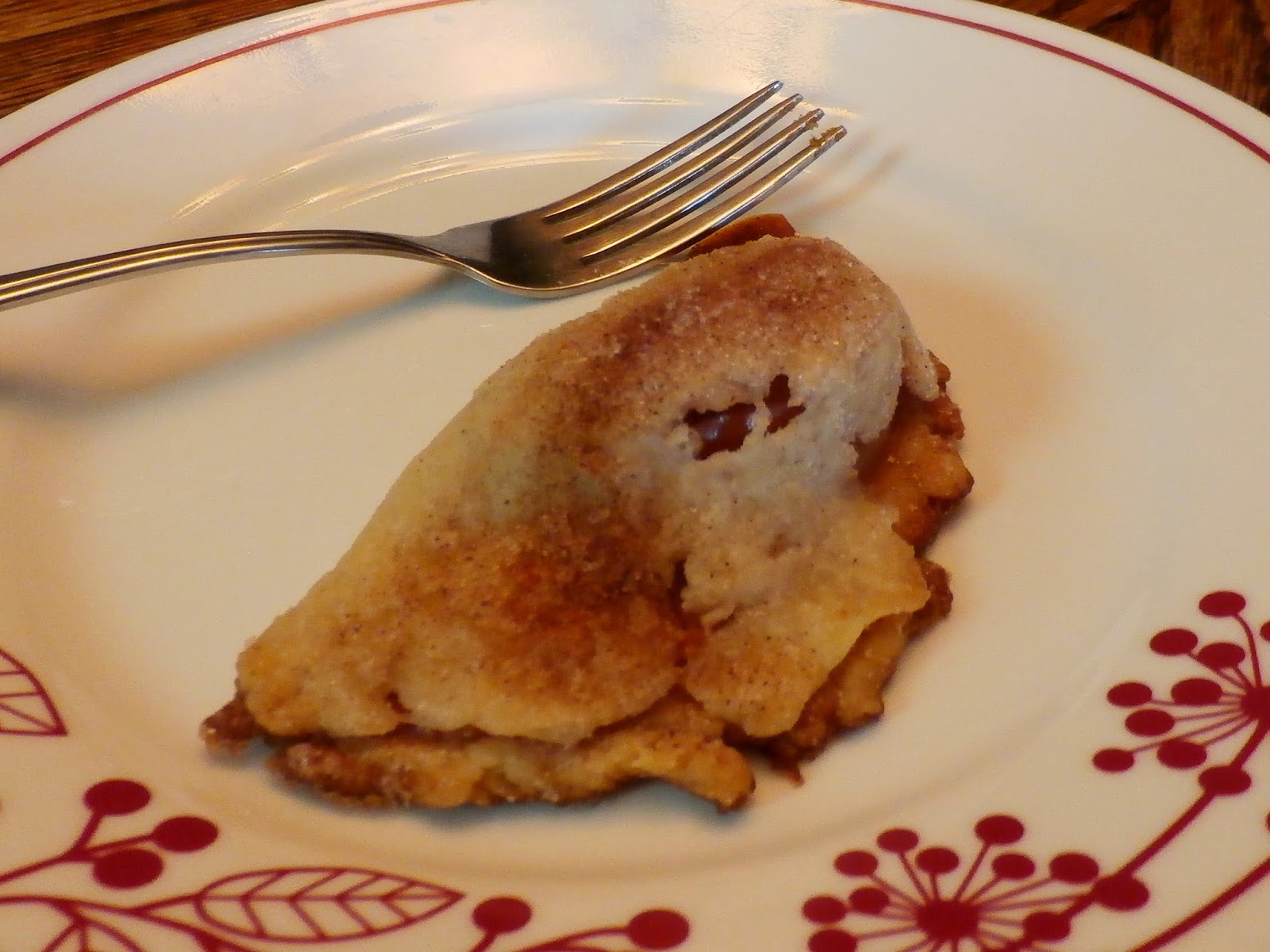 So instead of tossing the dough and apple to the chickens, we got a mini-dessert out of it!  Can't beat that with a stick :)