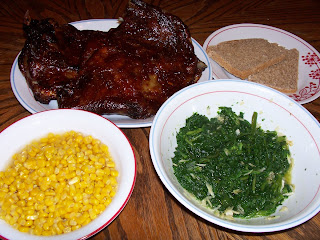 We had goat ribs in BBQ sauce, homemade bread, poke sautéed with butter/onion/garlic and corn for supper.  With the exception of the canned corn, everything came from or was made right here.  Ain’t that the greatest feeling?
Poke is one of my favorite spring wild greens.  I was introduced to poke several years ago by a dear friend, Rita.  She showed me some thick weeds starting up from her old garden area, handed me a knife and showed me which plants were poke & which were good (young enough) for eating.  She then had us over for dinner, which included the poke we gathered that afternoon.  After that, I was hooked.  Unfortunately we still lived in the suburbs at that time and I didn’t have any place to gather wild poke, so it didn’t grace our dinner plates for quite some time.
Once we moved here, I had several opportunities to gather poke.  In my real estate selling days, there would be times I would be showing raw land and end up coming back from our walk with a bag full of poke.  Got a few strange looks from a few of my clients, but I just couldn’t give up an opportunity to gather some.
Poke loves popping up in disturbed soils, and goodness knows we’ve been disturbing the land around our place lately, so I was hoping for a great harvest this year.  But there were only about a dozen more plants.  I guess I shouldn’t complain as it’s a dozen more than I had last year.
Poke should be gathered in the spring, just as the shoots appear or before the leaves get too big.  I try to gather them before the plant gets taller than 12”, but I’ve been known to pick the smaller leaves off taller plants. 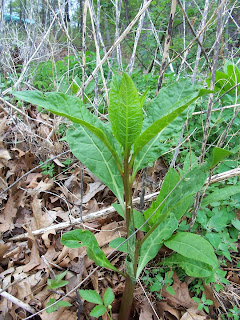 This plant is a little too large for harvesting, so I let it be.
Take the young leaves off the stalk & wash them off.  I start a pot of water to boil and toss the leaves in there for five minutes.  Then I drain off that water, add some more water and bring to a boil again for another five+ minutes.  Drain the water again & then add your preferred seasonings.  Like most greens, you need a lot of fresh leaves to make a meal of them as they shrink considerably. 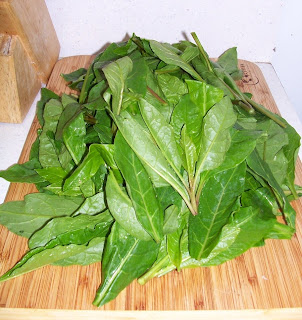 All these leaves made the teeny bowl in the first picture.
Poke is also known as Poke Weed or Poke Salad.  I try not to use the “Salad” part when I talk about it because it can be confusing; you definitely don’t want to make a traditional lettuce/greens salad using raw poke leaves.  Not sure how much raw plant you’d have to ingest to make yourself sick, but they are listed as being poisonous unless cooked in two changes of water.  And you also don’t want to eat the stalks, roots or berries.  I’ve read in several books that even a few poke berries could (have?) killed small children.

As always, make sure you have a positive ID on your wild food and don't assume that since one part of the plant is edible that the entire plant is good eating.
Posted by Carolyn at 8:48 PM