The turkeys are gobbling up a storm, we saw our first hummingbird yesterday (and put out the hummingbird feeders), my sister's Silkie has gone broody and setting on three eggs and our resident pair of Phoebes have finished building their nest.  For the past four, maybe even five years they have built a nest on the beam underneath the roof on the back deck.  Although they haven’t had the best of luck raising young the past two years.  Last year a strong storm knocked the nest and eggs off the porch and the year before I caught a black snake in the process of devouring the young.  I was hoping that they would fare better this year.  It’s tough with all the black snakes and our resident felines constantly lurking around so I figured I’d try to keep an eye out for them.


Since I have been neglecting taking pictures for the past few posts, I figured I’d take one of the Phoebe nest and add it to todays bird-blog.
I can’t really see inside the nest so I just took shoved the camera up close to the nest and took a few pictures.  When I downloaded them to the computer, here’s what I saw: 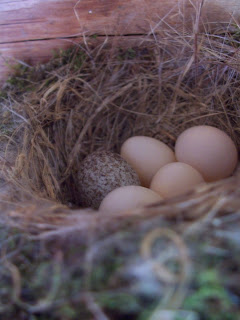 Four Phoebe eggs and a Cowbird egg!
Cowbirds are brood parasites; they lay their eggs in another bird’s nest and let the surrogate parents brood and raise their young.  The cowbird egg will probably hatch sooner and will be competing with the Phoebe’s chicks for food. It’s also possible that the cowbird chick will kick the other eggs or chicks out of the nest.
Normally I’m not one that likes to mess with Mother Nature, but I just had to do something for “my” Phoebes this year.  I mean, come ON!  One year a wind storm knocks your nest & eggs over, the next year a snake strangles and eats your week-old chicks, and then the following year a stupid cowbird chick is taking food from your chicks.
Now I have to decide what to do with it.
Chicken food?  Teeny-tiny omelette?
Hmmmm……I do have an incubator.
Paul's Take
If she incubates that chick I'm going to kill her.  Don't we have enough livestock to take care of without hatching out a parasatic bird?  Then what do we do with it?  I bet she doesn't even know what it eats.   Then we'll be raising maggots or mealworms or something so it can be fed.  Yep, raising grubs......that's what I'm here for.
Posted by Carolyn at 3:16 PM