I can’t believe it’s been almost a week since I posted something here.  Although in my defense, the house has been full of out-of-town family members since Wednesday.  Five adults, a teenager, a four-month old and a two-year old in the house at once.  Then add four more adults when the grandparents came over for a visit.  Needless to say, we had a house full.  Normally Rhiannon & I have the run of the house for a whole twelve hours each day, so it was definitely a little different routine for us.


I did have the use of an automatic goat feeder and waterer though.  As in a 5’-8” thirteen year old, that is.  Our nephew was one of the family members that came from Chicago for the holiday and he took up some of the barn chores.  Helping feed the goats and chickens, hauling water to the critters, weed whipping (wacking, strimming, whatever you call it), burning brush and watering the garden.  Any little bit helps. 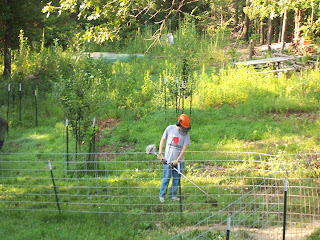 Ben may think twice before agreeing to visit his Aunt & Uncle next year!
We also sold two of the wethers this weekend.  They are going to be Luke’s little buddies and I’m sure they will have a wonderful life with him and his family.  Add that to the unfortunate & unplanned butchering of Nettie’s two doelings, we are now down to two kids.
I’ve separated Ishtar’s remaining doeling from her so there has been nothing but yelling the past week.  Cloud’s doeling is still too young for weaning so she’ll be staying with her mom and the rest of the herd.   I think I may have a buyer for both Cloud & her kid.  I really didn’t want to sell her because I’m really liking the Mini-Saanens, but the feed costs are getting to be too much.  And it’s not like we won’t have any more Mini-Saanens born next year (and the year after that, and the year after….).  I guess I just hate to see a perfectly good milker leave our farm.
And, how much milk do we really need?  I’m actually having to make cheese every three or four days and freezing it because we’re not going through the milk quickly enough.   Also made another batch of yogurt this weekend and had it set up fairly nicely.  I still strained it though as I like a Greek-type yogurt.
Anyhow, even if I sell Cloud, I’ll still have three milkers; Nettie, Ishtar and Annette.  Nettie will be bred to Pan again this fall for more Mini-Saanen kids.  Annette will also be bred to Pan, although her kids will be ¾ Nigerian mutts.  The jury is still out on Ishtar though.  I was thinking about selling her, but she is getting easier to milk and she’s cranking out milk like Nettie.  If she’s still around here this fall, I’m going to breed her to a Boer, let the kids fatten up on her plentiful milk and butcher them when they start looking yummy.   I had put an ad out last year looking for a Boer for stud, but never found one.  I know there are plenty of Boers around here so I guess I have to try harder to find one.
Ahhhh………it’s so quiet here now.  I can even hear the tick-tick-ticking of the Cuckoo clock.
It was nice to see family (especially our new little nephew!), but I’m glad to have the house back and not have to worry about cleaning (sort-of) it for company.
Paul’s Take
Obviously we didn’t move far enough away.
He’s kidding.  Well, maybe only half kidding.
Posted by Carolyn at 2:01 PM