We have almost as many cucumbers as we do squash.  And I traded a bag full of squash for a bag full of tomatoes from a friend of mine.  Our tomatoes aren’t doing very well.  Only a small handful of Roma and some yellow pear tomatoes.  The ones I got from my friend were Roma and some sort of large slicing tomato.  Which I immediately cut into a thick slice, put it on a hunk of fresh bread and sprinkled with salt & pepper.   Nothing better than a fresh tomato sandwich.  Well, I suppose some bacon would be grand, but as the bacon is the first thing to get eaten from our half-hog, I had to live with just the juicy tomato.

Since I still had a decent amount of tomatoes left, I figured I’d make a cucumber & tomato salad.  Honestly, I’ve never made it.  I don’t know why, but I just don’t make salads, lettuce or otherwise.  And I love them.  Whenever we have a get together, I always ask people to bring some sort of lettuce, pasta or veggie salad.
Anyhow, since the tomatoes and cucumbers were just staring at me, I chopped them up, added some sweet onion chunks and poured a poppy seed dressing over them.  So stinking simple, and I’ve never made it until now. 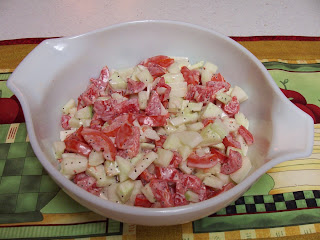 Hopefully we’ll be able to continue swapping squash for tomatoes and I’ll make this again real soon.
How stinking easy can it be Poppy Seed Dressing:
¾ Cup Mayonnaise or Miracle Whip
1/3 Cup Sugar
2 Tbsp. Apple Cider Vinegar
2 tsp. Poppy Seeds
Combine all in blender & zip away!
Posted by Carolyn at 7:45 AM