Impossible as it may seem, it was hotter yesterday than it was on Sunday.  Thermometer showed 103.5 degrees.  The only “good” think about these temps is that my laundry dries in like forty-three seconds. 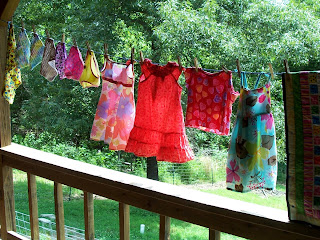 The heat seems to be making all the nasty bugs and reptiles (who I consider considerably less nasty than the insects) quite active.  Flys are everywhere, hornets & wasps are getting aggressive and I’ve even seen the tiny brown lizards sitting on the shade of the deck so they don’t pop their radiators (that is what happens when they get too hot, right??)
Over the past week or so, I’ve been finding pieces of eggshells in the nest boxes and was worried that I had an egg-eating hen on my hands.  The weird thing about it was that half the shell was still there.  Any egg-eating chicken I had would leave not a scrap and the only evidence would be a wet spot in the laying box so I was wondering what was up with the half-shell.
I found out this evening when I went to collect eggs.   A black snake was making a meal out of the contents of one of the nest boxes, and there was an egg shell left behind.  Curious as I was, I let the little bugger finish swallowing the egg he started and it cracked before it was down his throat.  Picked him up and stuffed him into a pillowcase to relocate down the road.  Although I did really, really consider chopping his scaly head off.
Posted by Carolyn at 11:00 AM