It’s summer time, and in the garden that usually means there is an overabundance of squash.  Yellow squash, crookneck squash, zucchini, cucumbers (that kind’a counts as a squash, right???).

Our yellow squash and zucchini have taken off and I can’t cook them fast enough.  One of the last people who came here to pick up some goat milk left with a bag of squash. If we lived in a neighborhood I’d be sticking bags in random mailboxes.
Squash casserole, zucchini bread, sautéed squash with onions and breaded and fried squash (artery-hardening-goodness!).  I’ve even started putting slices of zucchini in my ten-pound stuffed pizza.  Great way to get “rid” of zucchini and goat cheese at the same time. 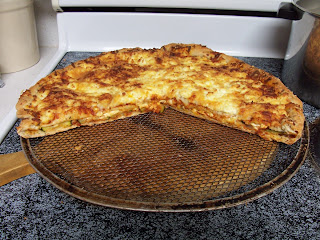 My winter squash plants are also taking off.  I’ve actually planted two batches of butternut, the last one about a month ago.  I’ve never planted winter squash before so I’m hoping to be able to root -cellar some of them and see how long they will last through the winter. 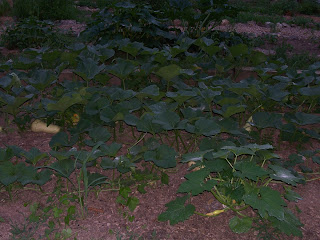 We also started a tractor tire of potatoes in wasted hay.  Never planted them before so this was kind of an experiment.  Nothing fancy, just some of the store bought ‘taters that started growing eyes; I even think Paul put in a sweet potato slip.  I wasn’t really sold on growing potatoes as they can be purchased on sale pretty much dirt cheap and they’ll keep a long while.  I also didn’t think I’d have time to do a large crop of potatoes, but now I wish we did.  They are turning out pretty easy to take care of.  But we haven’t actually harvested any yet so I guess I should keep my yap shut until we do. 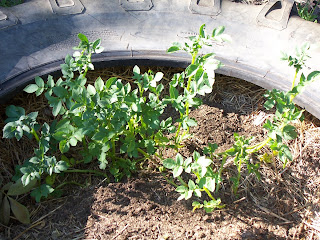 My potato vines.  At least I think they're potatoes.
Never grew them before so for all I know they could be something else.
The tomatoes are doing only marginally well.  It also doesn’t help that the stinking chickens have taken to picking at the red ones and leaving half-eaten tomatoes in the raised beds.  I swear I read somewhere that people would let their chickens out in their gardens to pick off the bugs and that they would leave the tomatoes alone.  Apparently my chickens didn’t get the memo.  The stupid biddies won’t even eat the tomato hornworms when I hand-deliver one to them (another reason the tomatoes aren’t doing very well).  Hornworms are scarrrryyyyy looking bugs!  I was picking them off and putting them in a dish (no, not a side-dish) for chicken food and noticed that they make clicking sounds when they are mad.  I think it’s their “teeth” (do worms have teeth????) grinding together to make the noise.  Freaky.
Guess I don’t really blame the chickens for not eating them.
Posted by Carolyn at 5:32 PM