As if slow-cooking my newly hatched chicks isn’t bad enough, one of my does has mastitis.  Nettie, my wonderful, well-behaved, lovey-goat great milker, has Mastitis in her left udder.  I’ve read a lot about it, and hear stories from other bloggers and dairy forums, but never thought it would happen to us.  You know, mastitis only happens in those huge factory farms, or in dirty poopy milking rooms or if you don’t wash your milking equipment well enough, right?  I suppose I was in denial for a while, mostly because it wasn’t an acute case and Nettie didn’t seem to be in any pain.

About two weeks after I took Nettie’s doelings off her to wean them, I started noticing a bit of light yellow sediment in the bottom of the milk jars after they sat in the fridge for a few days.  I didn’t think much of it at the time and attributed it to the fact that I had also started the goats on Selenium and figured it was from that.  About the same time, Nettie’s left side udder started putting out less milk than usual.  Once again, I didn’t think much of it and figured it was because the does weren’t nursing and the fact that her left side always put out less milk than her right half.
I stopped the Selenium but the sediment was still there.  And her left side kept putting out less and less milk.  Did some brushing up on my Mastitis reading and found out that the sediment could be a sign of mastitis.  She didn’t have any of the other “normal” signs of mastitis; clots or blood in the milk, hot udder (although it’s been like a million degrees outside so it was kind’a hard to tell), sensitive udder or higher than normal temperature in the goat (took her temp and it was on the high side of normal, but figured it was because it was so hot outside).
There are a few over-the-counter tests you can purchase for checking for mastitis, although technically they only check for somatic cell counts (SCC) and not the actual bacteria responsible for mastitis.  If you want to be 100% sure if it’s mastitis and get the exact medication for the specific bacteria causing the mastitis, you have to send in a milk sample to one of a small handful of places, the closest one around here being LSU.  The cost of the test itself is usually low, if not free, but the milk sample has to arrive at the lab cold.  Which means it has to be sent via FedEx or UPS overnight with several cold packs.  And it costs from $56 - $92 to do that depending on if I wanted a morning or afternoon delivery.   I called FedEx and asked them if they thought my sample with cold packs would make it to the final destination still cool.  No guarantee, especially with the excessive temperatures we were having.  I didn’t want to risk the $ if it didn’t have a good chance of even getting to the lab in a useable condition.  Call me a bad goat owner, but I opted for less expensive option.
So here’s what I got: 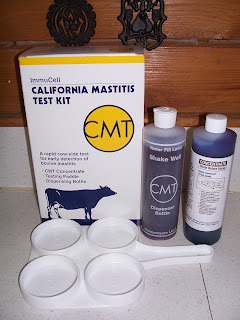 I bought it online from Caprine Supply for $17.95 plus something like $5 for shipping.  It comes with the concentrated solution, a mixing bottle, the little milk sample paddle / cup thingy and instructions.  There is enough solution for bunches & bunches of tests.  Yes, that is the technical terminology.  The only thing I wasn’t too crazy about was that the standard mixing bottle (and measurements used for testing) made way too much solution.  I could have tested a huge herd of goats with the mixed solution, but since there weren’t any other measuring instructions, I had to use the mixing bottle that came with the kit.  So about 95% of the solution goes into the garbage.  But I still think it’s a good deal for the money, even with the waste.
Anyhow…..You pour the concentrate up to the bottom line in the mixing bottle, then fill the rest of it up with water and shake until well mixed.  Put your samples of milk into the paddle & tip the milk out until the milk level is even with the outer circle in the sample paddle.  Tilt the paddle back until the milk sample is halfway between the larger outer and smaller inner circle and then add the mixed solution until the milk/solution level reaches the inner circle.  Swish the milk around and results happen within seconds.
If the milk solution gets gooey or gels up, there is a high count of somatic cells in the milk sample.  Which means you probably have a case of mastitis.
I did my test three times.   And not necessarily because I wanted to triple-check the results.
I washed Nettie’s udder, wiped her teat with the alcohol prep pad, discarded the first three or four squirts of milk, and then milked about a half cup of milk into a disposable cup.  Did the same with the other side.  I forgot to label the disposable cups so I just made a little tear in the top of the cup which held the suspect milk.
Took both cups of milk into the house and did my test.
Put the milk from the suspect teat into one of the paddle cups.  The first time I swished the milk solution around, nothing really happened.  I kept swishing and swishing and even waited five minutes and swished again.  It just looked like purple-tinged milk.  But as I’ve never done this before, I started really, really looking for gelling or gooing of the solution.  After several more swishes, a few tiny bubbles started to form from the motions and wait, could that be some gelling around the bubbles?  Well, if I stared at it long enough, it kind’a looked like it had some gelling around the sides of the bubbles.  Kind’a.  But not really.
So I tried again.  With the same results.
And then I realized that I had taken the non-torn cup (i.e. the milk from the non-suspect side of her udder) the first two times.   Duh.  Next time remember to actually write “Left” and “Right” on the sample cups.
So the third time I did the test with milk from her left side.  And it gelled up in about five seconds.  Now I had pretty much positive evidence of mastitis.  And although it sounds bad, I was a bit relieved that it did test positive.  Well, maybe the correct term isn't "relieved", but I was glad that we now had some idea what we were dealing with and how I was going to treat her.
Posted by Carolyn at 2:24 PM