Blanket for the Berries

There have been several of my blogging buddies that have posted about having to put their strawberry plants to bed for the winter.  This was our first year raising them so I'm a bit behind not only in the learning curve, but the tucking-in of our berries.  Which I only did because everyone else was doing it.

I quickly looked up wintering strawberries on the internet and one place said not to mulch until there were several hard freezes and after the plants went dormant.  Well, my plants were still nice & green, but we've had temps in the lower 30's for a solid week so I figured I may as well do it now before it got pushed all the way down on the get-to-it list.

So, what to mulch with?  Pine needles?  I wish.  We don't have a single pine tree on our property nor any nearby which I might rake up fallen needles from.  Straw?  Sorry, but I'm not paying six bucks a bale for straw.  Wasted hay?  No way!  I used wasted hay in the berry garden one year and I was pulling grass weeds throughout the entire growing season.  Didn't quite think that one through.

So I look around and used what I have a ton of right now: 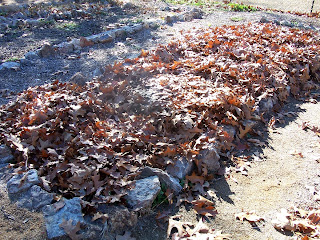 Leaves!  Tons and tons of leaves.  I didn't even have to walk more than fifteen feet from the garden to rake up enough to cover the beds.  I probably should have sucked them up with the leaf blower/chipper as to create a finer leaf-mulch but it was getting dark and I was running out of time.

So my first strawberry bed is finally tucked in for the winter.

And now I've got mulch on the brain.  Since I've got to do something with all these stinking leaves around the house, I think I will I'll have Paul pull the leaf blower/chipper out of the shed so I can put a nice layer of mulched leaves in the gardens.
Posted by Carolyn at 9:57 AM