Both Annette and Nettie have been bred this Fall; we should have kids on February 28th and March 19th.  I wasn't able to procure a Saanen stud for Nettie so I had Pan breed her again.  Which I guess is ok as it's the last set of kids I'll get from him because just ten minutes ago I sold him for two bags of grain.  Seirously, I traded his bastardstinkyass for two fifty pound bags of cracked corn.  And I'm thrilled.

Anyways......I normally give the pregnant does a three month break from milking so it's about time I started drying Annette up and Nettie will follow a few weeks later.  And in anticipation of losing my supply of goat milk, I made a batch of granola.  I start thinking about how much I'm going to miss the fresh milk and then have sudden cravings for anything with milk in it.  Normally, cold weather would make me want to have a hot bowl of oatmeal or grits for breakfast, but I want to get in all the milk-filled breakfasts I can before the girls are dried up. 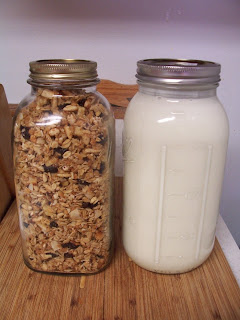 Speaking of goat pregnancies, when I first got Lily (the Boer doeling) I was afraid that she was pregnant.  Being as she wasn't even six months old, I chose to terminate her potential pregnancy using lutalyse.  If she was early along in her pregnancy, her body would reabsorb the fetus.  If she was farther along, she would go into labor and deliver a premature kid.  And if she wasn't pregnant in the first place, she would just go into heat.  I watched her closely for an entire week and didn't notice any blood, signs of labor, aborted kids or even signs of heat.  So maybe I was lucky and she wasn't even pregnant to begin with.  But I'm glad I gave her the lute anyhow otherwise I'd be going crazy wondering if she was going to kid at such a young age and have problems.  Technically, she could still be pregnant as lute isn't 100% effective, but she doesn't look like she's any bigger in the belly than when I first got her.  Still crossing my fingers though and still trying to catch her in heat so I can start tracking it.

Pickles has gone through several heat cycles already, her first one was when she was only three months old and one just a few days ago.  I don't plan on having her or Lily bred until spring, but I've never had year-round breeders so I want to keep good records for reference.
Posted by Carolyn at 2:44 PM