Ok, first let me start by saying that I hope that any of my blogging friends in Sandy's huge path have weathered the storm without much damage.  And if you have, I pray you are able to get back to normal quickly.

Being so far inland, we haven't had seen a single drop of rain nor much more than a slight rustling of the leaves.  The nighttime temperatures have been in the low thirties for the past few days, but our daytime highs are supposed to be in the mid to upper 60's.  I actually wish Sandy would have graced us with some of that moisture as we are technically still in a drought situation.

But what I'd really like to rant about is the news.  I'll be the first to admit to taking advantage of modern-day weather forecasting advances.....I'm an internet radar junkie.  But "Frankenstorm", "Superstorm", "Storm Crisis"......"We're ALL going to DIE" headlines?  Once again, please don't take it that I'm undermining those that have suffered from the storm, but come on.  The conspiracy half of me says that this is just a wonderful opportunity for the news outlets to distract us from the upcoming train wreck election.  Not that I mind a break in the political crap and I haven't even watched any of the debates online or anything!  But even around our little town, there are "Romney" and "Obama" signs everywhere, not to mention the local political hacks littering the roadsides with their garbage.

It's as if every neighbor is trying to outdo their neighbor by the size and number of "their" candidate's political junk.  My stepfather and the neighbor directly across from them each put up a small sign in their yard professing their loyalty.  Then about a week later, the neighbor two doors down put up a HUGE sign, probably 4' high x 12' long stating where her loyalty lies (pun most definitely intended).....the other candidate of course.

I'm sure there are many, many heated arguments occurring between good friends regarding as to why their choice is best for the country.  But what disappoints me most is the blind, unwavering trust that a person has for their candidate.  You know, the Republican or the Democrat.  Because that guy is going to turn things around.  My candidate truly cares for me.  And if the other guy wins, the country will go down the toilet.  Do you really think your political champion has one iota of compassion for you, personally?  How about doing some real research on the candidates people??

I'd bet my best milking doe that not a quarter of the people who are the most vocal about the election have actually done a lick of research into the candidates.  Their "knowledge" of the politician is whatever they glean from the vicious political ads and what the talking heads have to say on CNN.

What is their voting record?  Have they kept to promises made in the campaigns?  Are there illegal things that candidate has admittedly done, yet hasn't been held accountable for?  And most importantly, are they UPHOLDING THE CONSTITUTION?

Wake up people.  The country has been going down the toilet for years now.  It doesn't matter one lick if a Democrat or a Republican wins this election; they are two sides of the same coin.  And quit telling people that they are wasting their vote if they decide to vote for someone other than the D or R guy.  Why settle for something you don't believe in, just to spite the other candidate? If you haven't yet noticed that it makes very little difference who's in the White House then you need to do a little more research and think about our elected civil servants more than every four years.

And, for those of you who may be into posting signs in your yard, here's one I created myself (with help from graphic-artist seester, of course!).  Feel free to copy it and litter your yard with them.  Or slap them over your neighbor's poster.  But I didn't say that. 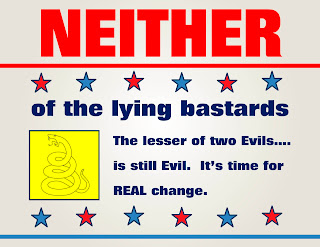 So there's my last political rant for this year.  Well, maybe.
Posted by Carolyn at 1:51 PM