The Need for Mead

I'm not a big wine drinker.  I don't care for the bitter taste.  Oh, I've tried all the "sweet" wines out there, even Mogen David.....

"And I can feel my teeth rotting away from an excess of sugar that no amount of toothpaste can dislodge. I will taste those damn Milago coolers forever."  (I may send a prize to anyone who knows where that quote came from without looking it up on the internet.)

But even those supposedly sickeningly sweet wines leave a bitter taste in my mouth.  I mean, I guess if there was nothing else to drink and I really, really needed a buzz I'd down a glass (or four) but only for the lightheadedness that it would cause and not for the taste.

But it seems that there will always be something in me that makes me want to make something myself.  Soap?  Oooo, I want to do that myself!  Milk?  Ooooo, let's get goats!  Bread?  Ooooo, I wann'a make raisin bread and whole wheat rolls and sourdough.  So I figure it was only a matter of time that I experimented with making an alcoholic beverage from scratch.

Honestly, I'd rather make homemade whiskey, but for some asinine reason, one is only "allowed" to make wines (and mead).  Tell me what the hell the government has to do with me making my own whiskey?  Wine is ok, but Whoa!  Hold on there, now don't you go making moonshine, that's just wrong!  What's the difference?  F'n overbearing, over regulating, overpaid and overzealous shitforbrains.  I'd better stop before I begin an anti-government rant.  Although I suppose I am overdue for one.

So, since our overlords won't allow us plebs make our own whiskey, I settled on making mead.  And actually, it's not all because of the feds.  It had a little to do with finances.  As in a still would be expensive to make and mead I could just make with some jugs of spring water, honey, yeast, a handful of raisins and some balloons.

Paul looked up a few recipes online and this is the one I pretty much followed.

We made two batches.  I asked Paul why we didn't make like fifteen gallons.  If I'm going to wait six stinking months for this stuff, I don't want to have to wait another six months after I taste it and decide I liked it.  I was obviously much more optimistic (which was kind'a strange) than Paul as his reasoning was what if we didn't like it and then we were stuck with fifteen gallons of "ick".  True.  So we only made two gallons. 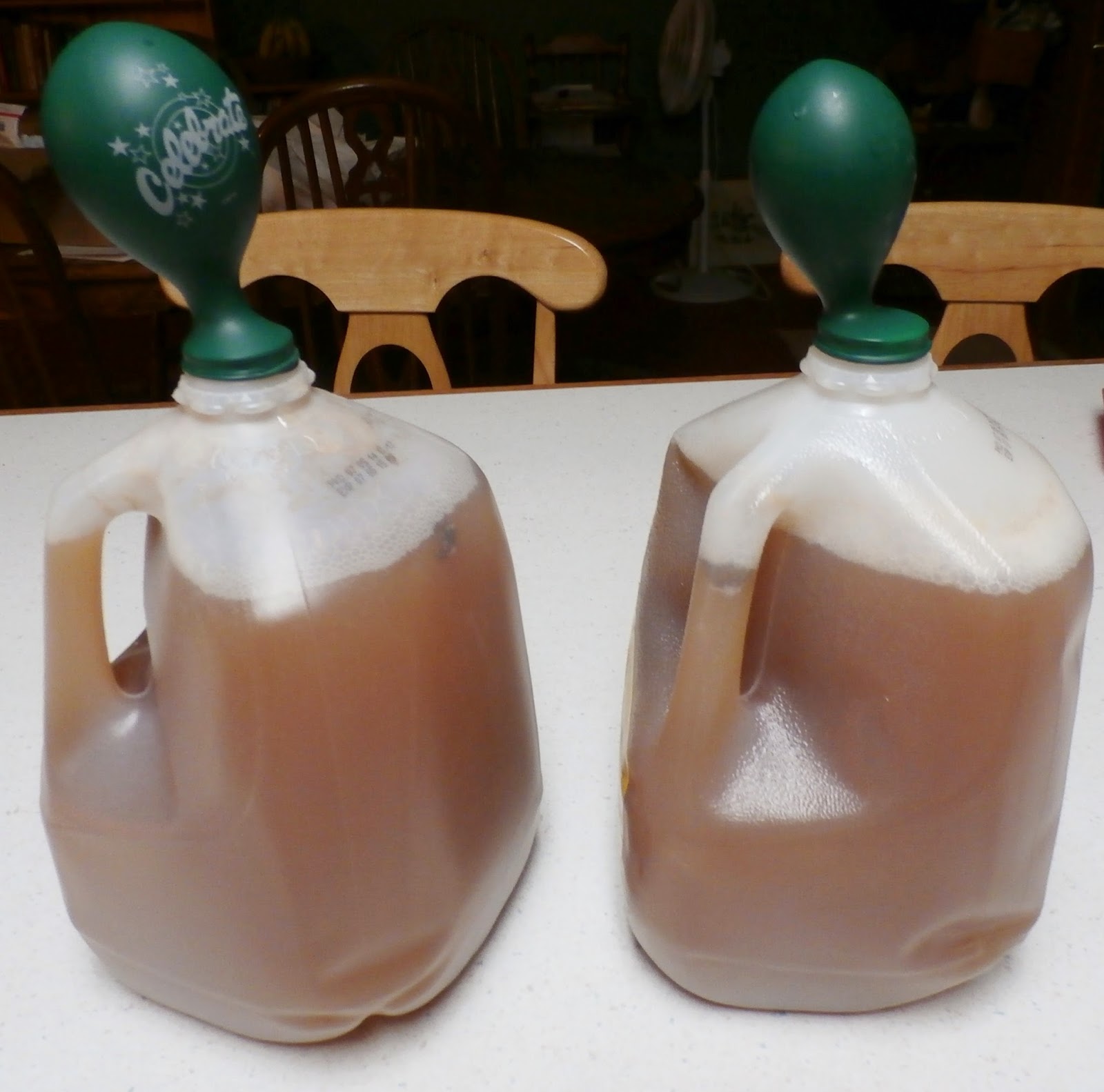 But honestly, I'm the kind'a gal that will eat or drink just about anything I make, even if it's a little "off" or "meh".  For example, the squirrel we had last week.  The smaller ones were good, but the older ones were like chewing on an old tire.  But damnit, we killed 'em, skinned 'em, cooked 'em, so I was going to eat them.  So I soldiered through the tougher ones and just gave my jaws a good workout.  I figure the same would hold true for the mead.  It would have to be really, really, really terrible for me not to drink it.  Like so terrible that I wouldn't be able to hold back a physiological reflex to spit it out.

We started the mead on August 2nd and it is still bubbling away.  In a few more days, or whenever it stops fizzing, we'll take the balloon tops off, put the caps back on and stick them in the basement pantry.  And we'll probably do a taste test a month later.  Apparently, like wine, the longer you let it sit, the better it gets.  So I suppose we'll try to wait until January for the best outcome.  Just in time for Paul's birthday.
Posted by Carolyn at 5:56 PM