Technically the scorpion isn't a true insect, but an arachnid.  It's creepy, it's crawly and it crunches when you step on it (hopefully with shoes).  Bug.  Or close enough.

We have one type of scorpion around here, the Striped Bark Scorpion.  I've seen an occasional one in the garage, under a log, and unfortunately, one under my foot.  My bare foot.  And got stung.

One evening after dark, I walked outside to the porch to get Charlie's food dish and as I walked back inside, I felt a very painful sting on my toe.  I immediately though I got stung by a wasp as that is what it felt like, and as soon as I turned on the inside light to find the source of my pain, I saw not a wasp on the floor, but a scorpion scoot across the door threshold and under the wood trim around the door.  INside the house.  Great.

After (and during) much swearing and fussing, I called Paul to come and find the bugger as I didn't really feel like having a scorpion indoors with us.  I showed him exactly where the scorpion went under the trim and he couldn't see anything so I insisted that he pull the trim off the door frame.  That little bugger had wedged himself so tightly between the wood trim and the logs of the house that it was impossible to yank him out of there.  Not wanting to have him scoot to his freedom and someplace other than where we could see him in the house, my mind raced as to what we could do to kill him.  Wasp spray?  Too messy for indoors.  Shotgun?  Too much incidental damage.  Acetylene torch?  Not happening with a log home.  So I did the next best thing; I grabbed a metal spatula from the kitchen and wedged it into the same spot the scorpion was hiding in hopes of hearing a satisfying "crunch".  Which, thankfully, I did.

Although I ended his life that evening, the sting continued to throb for a full three days.  Oh, and did I mention that about an hour after the initial sting, my tongue started to tingle?  Pretty weird, but apparently not that uncommon of a symptom.

Normally I'm not a huge murderer of bugs that aren't eating my garden, destroying my home or actively seeking me out for target practice.  I've actually caught several scorpions and put them in jars for Rhiannon to look at and then later released back into the wild (i.e. the woods behind the house), and as luck would have it and seemingly in anticipation of "Bug Week", I caught one just a few days ago: 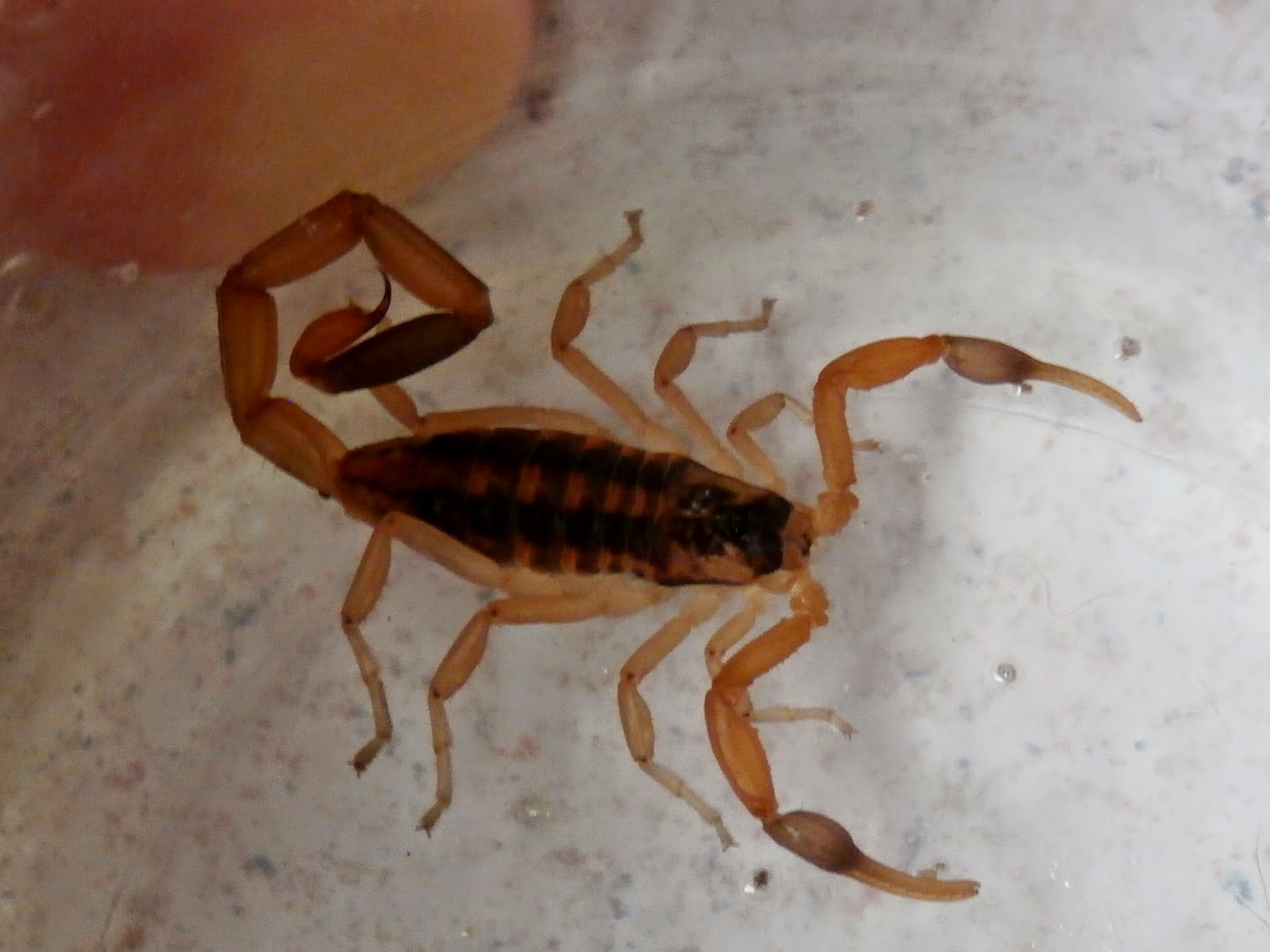 And I have to admire the females as their gestation period is a long eight months, she gives birth to them (as opposed to laying eggs like other arachnids) then she allows her children (called scorplings, how cute is that?!?) to ride around on her back until their first molt, usually about a week later.  The baby scorpions then hop off Mom & attempt to find lunch and establish a territory of their own.

The Striped Bark Scorpion eats other insects and arachnids like spiders, flies and centipedes (and occasionally an annoying male if he won't leave after the date), but don't munch on them.  The venom they inject into their prey liquefies their insides so the scorpion can suck the yummy-ness out.  Some scorpions can go up to a year without eating and many may not even need to drink water as they get their moisture requirements from their prey.

I, however, am hungry (imagine that) and need to start thinking about fixing supper for my family.  I will leave you with one last tidbit of trivia about scorpions; they glow when exposed to certain wavelengths of UV light - like the ones in a black light - so they'd make a pretty cool companion the next time you're at an 80's roller rink and they turn on the disco ball and black light and play "Rock You Like a Hurricane".  Get it???  Hugh?  Ugh, nevermind.

I wonder if they'd have eight teeny-tiny roller skates for rent?
Posted by Carolyn at 3:57 PM