I never had Pickles tested to see if she was pregnant.  I'm assuming she is not.  I hate her.

I'm assuming that Lira (the half Boer half Nubian) is pregnant.  But she's still small, both in the belly and in general stature.  Which is worrying me now.  Her mother wasn't very big, so I wasn't expecting her to be very big, but I'm now concerned about her kidding.  She was bred to Studly, who was only a wee thing himself, so hopefully her kids will be small enough for her first kidding.

Oh, and Lira screams just as much, if not more, than Pickles.  I also hate her.

Herman continually knocks off his head-gear so the effer is always getting his head stuck through the cattle panel fence.  Sometimes I see him out there, stuck, and I yell at him and leave him there just because.  You'd think he'd learn.  You'd think I'd learn (not to get goats with horns).  So yesterday Paul and I had to wrestle with him and duct-tape the PVC pipe back to his noggin.  I hate him.  Herman, not Paul.

Then, there's the fact that the only friendly Boer goat from last year's kidding is Gimpy.  The one we're going to eat.  The other two, Clover & Dilly, run from me every chance they get.  Even when they know it's feeding time.  I have to run after those jerks every stinking day.  And they know that once they get clipped to the fence, that they get to eat.  So, what's with the running away from me?  I've given them treats, I scratch their heads.  But still they run.  I hate them as well.

So, why do I have all these goat that I clearly despise?  Well, it wasn't supposed to be that way.  The three Boers that went to the County Fair last year were supposed to come home, tame, broke & just lovey-dovey.  But the only one that did is the one that's going into the freezer.  The Boer / Nubian cross doeling is not only semi-wild, but will no doubt prove to be a pain during kidding and I'm sure will end up raising kids that will hate me just as much as she does, if not more.

My plan, at least the one I have at this moment, and is sure to change at any time, is that I will try to breed Pickles first time she goes into heat, even if it's in the middle of summer.  If she doesn't take, she's going to the sale barn or into the freezer.  Same for Lira if she isn't a good mother or her kids are for crap.  And honestly, even if Lira's kids are decent, I'll keep the kids and still sell her.  I cannot stand the yelling.

None of my other goats yell like Pickles and Lira, and it is freaking annoying as hell.  You know that "Yelling Sheep"clip on youtube?  Funny, isn't it?  Well, until you hear that ALL freaking day. 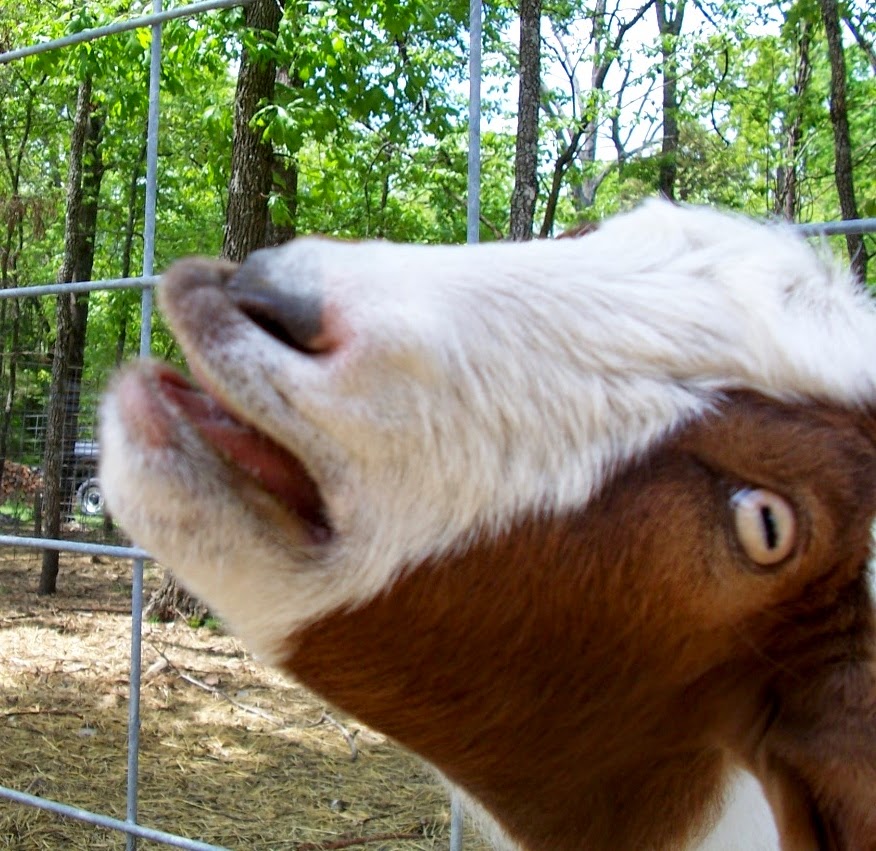 It's a beautiful day today.  I plan on going out into the goat pen to get the kidding stall ready and to muck out the shitton of wasted hay from the picky goats.  Maybe do some weed-pulling and maybe attempt to reclaim my herb garden from the Ozark jungle that took over.

And maybe, just maybe, I can resist the urge to continue the yelling match.
Posted by Carolyn at 11:56 AM