Our goats are dry lotted.  We don't have the pasture fencing up yet so the majority of their roughage comes from hay.  When I'm ambitious, once the grass starts growing in the spring I'll tie one or two of the goats up to a long lead and stake them out in whichever area is overgrown and could use some munching down.  It is, however, usually a pain in the rear because no matter how careful I am in selecting a stump, stick, large weed or other obstacle-free area, in fifteen and a half seconds, the goat will have managed to wrap the lead, and itself, around whatever branch may be sticking up from the ground and almost strangling itself or cutting the circulation off to a foot or something.

The next best way to get 'dem goats some fresh greenery is for me to get my sloth of a self out in the overgrown area and cut it down and feed it to them in their pen.  I used to use a pair of kitchen shears to do this, but it tends to not only be slow-going, but I end up with a blister on my finger.  So last year I tried using a small, antique hand scythe I had hanging up on the wall as a decoration.  Paul sharpened it up for me and it worked rather nicely.

So today I took the hand scythe down from it's winter hanging spot and scythe'd myself two laundry baskets full of "Fresh Mixed Greens" for the Caprine Crew.

They were most appreciative: 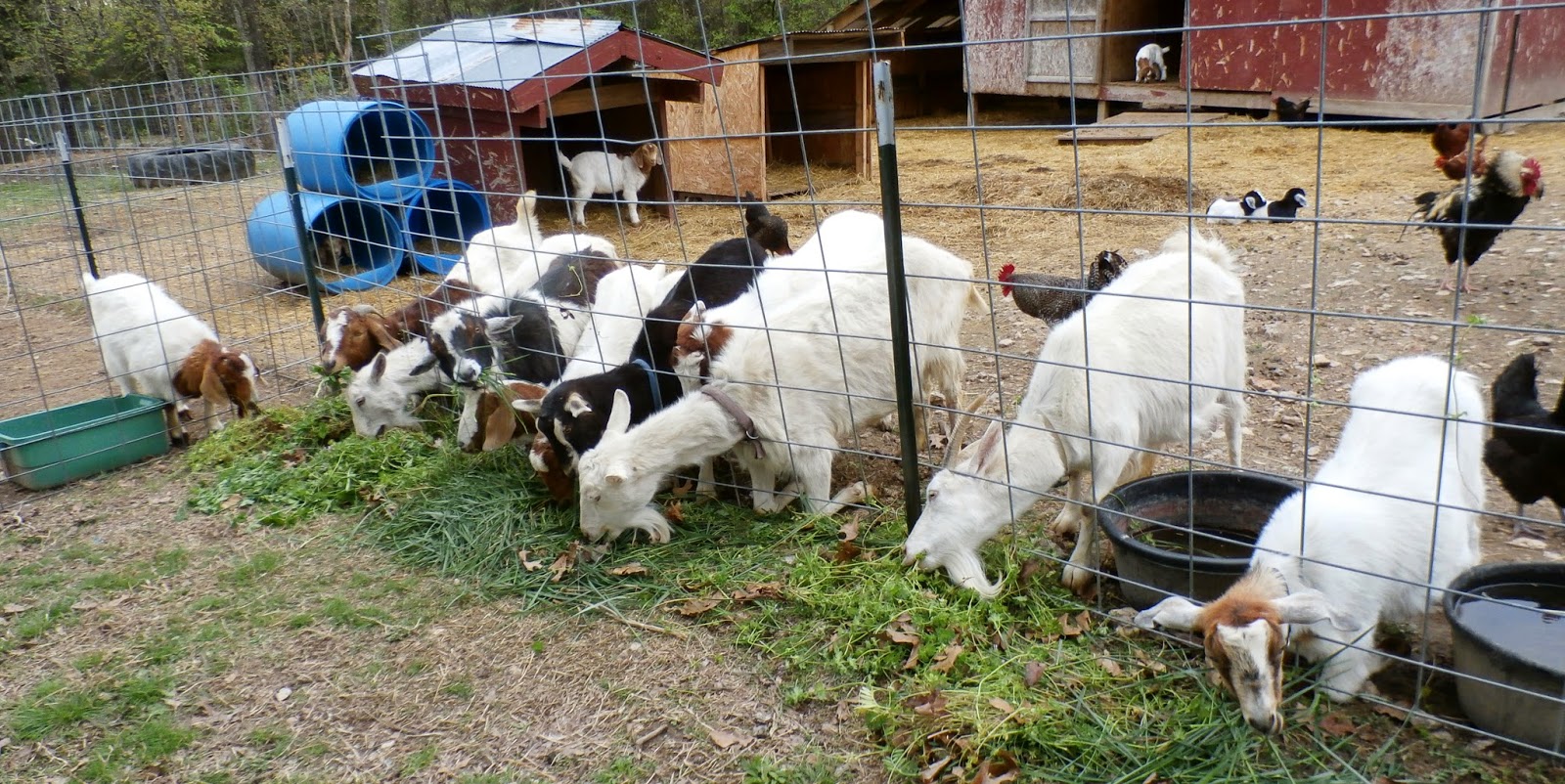 Well, at least I'll pretend that they were.  They did seem to be enjoying themselves.  Well, at least in between the pushing and shoving and head butting in order to get to the better greenery....even though it was all pretty much the same thing.  Are all livestock so freaking crazy about foodstuffs?

I bet I could tie up all my goats and come out of the barn with a bucket of cat shit.  I would walk around with the bucket and let one goat come near the bucket.  As soon as the other goats saw that the selected goat was even remotely interested in the bucket, regardless of what was in it, every stinking goat would pulverize, stampede or otherwise do whatever it was in their power to get to, and even possibly eat, everything in the catshit filled bucket just BECAUSE some other goat was looking at it.

Anyways.  Back to the scythe.

So I was thinking, maybe I could invest in a full sized scythe.  It would make cutting all that goat food a ton easier.  Well, at least after I figured how to use it.  Apparently there is an art to using one.  And given my not-so-good hand-eye coordination (remember the whacking of the rabbit?  There is STILL a gash in my shin from it.), I'm a bit concerned that I may lop off my leg or at least slice into it far enough that I'd sever an artery and end up bleeding to death out in the middle of the back yard before anybody noticed that I hadn't been seen for a while.