Unfortunately, not these kinds of Spring Eggs: 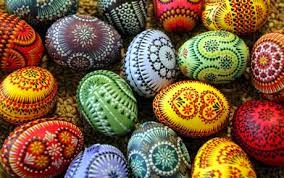 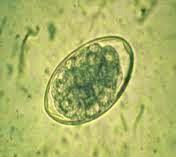 Spring is the time for parasites & parasite eggs.  And the boogeyman of the goat parasite world would have to be Haemonchus contortus , or otherwise know as the Barberpole worm.  Unfortunately, because of the rampant overuse of worming medications, the Barberpole worm has become practically immune to any of the worming meds.  I used to feed my goats a pelleted feed with a wormer already in it for years, but after doing "before" and "after" fecal tests, I realized that not only was it pretty much worthless, but I had a false sense that my goats were being adequately treated.  Ivermectin, although I do use it for other types of worms, is also basically useless against the Barberpole.

There are other management techniques that can be implemented to reduce your goat's worm load, first and foremost being able to rotate the goats from pasture to pasture during the year.  Another good management practice is to prevent (well, a much as possible with goats, that is) the goats from stepping / pooping / laying in their feed.

Since we still have the goats confined to a relatively small area, the worm load in the ground must be bad.  And until we can get more areas cleared for fence, I'll just have to hope that I can reduce their exposure other ways.  We used to feed hay from a manger inside the goat pen, but have since put the hay outside of the pen.  The goats have to stick their heads through the cattle panel fence to get to the hay.  This way, they can't jump /poop in the good hay and therefore will (theoretically) pick up less worm eggs from the hay not being (as) contaminated.

There are also several studies that show Sericea lespedeza is useful for keeping worm numbers down because it is high in specific tannins.  Although this plant is invasive in our area, I'm going to bet we'll be cultivating some of it into our "eventual" pasture because of this reason.  In the mean time, I'm going to try some of the pelleted lespedeza and see how that works.  Assuming the picky buggers actually eat the stuff.

Giving the goats a bi-yearly copper bolus is another a way to keep the Barberpole Worm numbers down.  Speaking of which, I'm pretty sure I'm past due giving everyone their copper-bolus-filled marshmallows and dates.

I've been trying to do more fecal exams on the goats lately in order to determine exactly who needs worming and when, instead of just dosing the entire herd every so-and-so months.  Annette seems to be particularly susceptible to the Barberpole so I've been monitoring her.  I did another exam just this morning, and although the slide didn't show an "OMG" amount of worms, it definitely won't hurt to try another round of medication.

This time I'm pretty sure I'm going to use Levamisole Hydrochloride (trade name Prohibit).  I need to do a little more research on the effects of it on nursing animals before I dose her, but I'm pretty sure that's the only other anthelminic (de-wormer) that will have a substantial impact on her worm load.  I'll do another fecal exam a few days afterwards, then  hopefully come up with a slide void of any significant worm eggs.
Posted by Carolyn at 2:28 PM