Paul made two raised garden beds earlier this year.  Only had tomatoes & peppers in them & they didn’t do too well with the heat though.  Paul said he’ll try to get several more beds in before winter so I can start digging compost into them to get them ready for spring planting. 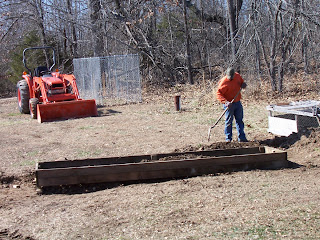 Nettie had two kids in mid-May, a doeling named Cloud and a male freezer goat.  Annette had a single doeling just a few weeks later.   We bred the goats a little late last year so I want to breed them earlier this fall.  Here's a picture of Annette & her first kid, Stormy. 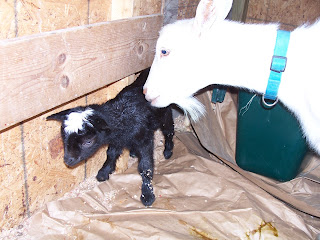 We also got sixteen fruit trees planted this year.  Started with twenty, but lost two plum & two apple trees.  No fruit for a couple more years.
Had a couple of our hens go broody this summer.  Unfortunately lost one hen & her two chicks to a raccoon because she wouldn’t go into the shed at night, then another hen's chick went missing & I had to put one down that had some really bad leg problems.  So out of eight hen-raised chicks, we only have four now.  One of them is already laying, but the others have a couple more months until we get any eggs from them.  If I find a cheap incubator in the paper I think I’m going to try my hand at incubating again.  I’d rather have the hens raise them so I don’t have to keep a heat lamp on them, but it seems that my broody hens can’t manage to keep more than five or six eggs at a time (they either keep breaking or they are eating them, not sure which) and out of those only a couple of chicks survive. 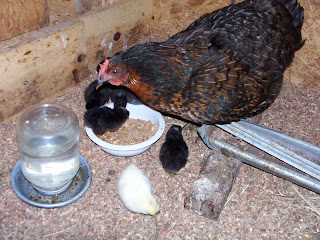 Our garden was pretty pathetic again this year.  I started like 100 seedlings indoors in March, but most of them didn’t make it.  I think I didn’t have the light close enough; they were really spindly & never grew much once they were planted outside.  We got lots of yellow & red pear tomatoes, sweet banana peppers, a handful of green peppers & about a dozen cantaloupe.  The raspberries & blueberries didn’t do well this year, probably because I didn’t water them enough during the hot weather.  Mom’s raspberry & blackberry bushes did real well.  I’m going to have to plant the type of blackberry bushes they have as they were huge, thornless and absolutely delicious!
Posted by Carolyn at 11:14 PM