Working at the Goat Wash - yeah! Come on & sing it with me....Goat Wash

I don’t know about anyone else, but all of my goats totally hate getting wet.  Anytime it gets even the least bit moist outside, they go running for cover in or under the barn. Like it’s acid rain or something.  I’m melting…. I’m MELTING!!!!  I can’t even get them out in the rain with a bucket full of grain.  Anyways……….
Nettie was in heat earlier this week so we had put her in with our buck, Mr. Stink-O, (aka Pan) a few hours for two days.  She smelled so bad that I ended up tossing her milk to the chickens both days.  Not that there was really anything wrong with the milk, but after having my nose up next to her during milking time, I just couldn’t bear the thought of drinking milk that came from anything so very, very stinky.  And to think that this was “second-hand” stink.  The does and their kids stay in the goat barn up in front & Pan & the freezer goat stay in a pen in the back yard.  It’s been so smelly this year during rut that I’m no longer able to put my laundry outside to dry in the back yard.  I couldn’t bear to smell Nettie anymore so I decided to give her a bath.  I’m sure some people wash their goats, especially those that go to the fairs, but I’ve never really had a reason to.  Until this weekend.  So I walked Nettie up to the house by the water spigot, gave her a handful of ‘Nilla wafers and drenched her with the hose.  Since I didn’t have any goat shampoo (I’m sure there is such a product, but I don’t even buy doggie shampoo so I sure as heak wasn’t going to be buying any goat hair care products) I just used some Dawn dish soap.  Hey, I figure if it’s safe enough to use on those cute little sea creatures covered in oil sludge & strong enough to take petroleum products off, then it should be good enough for a goat with buck stink all over her.
Well, I had Nettie tied up to the front porch & did a pretty good job at scrubbing & cleaning her up. Of course, she was less than helpful.  At one point I was basically hog-tied by the goat lead & the hose wrapped around my ankles.  After I untied myself, I rinsed her off, gave her a nice fluffing with a towel and we were done.  She was so very, VERY clean!  She was so shiny & white that I didn’t want her to go back with the other does in case they messed up her hairdo!  Maybe if I get ambitious & we have another warm day I’ll give Ishtar & Annette a bath. 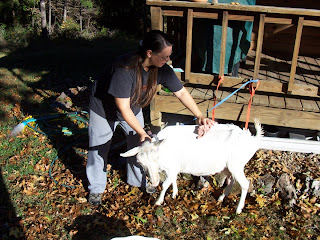 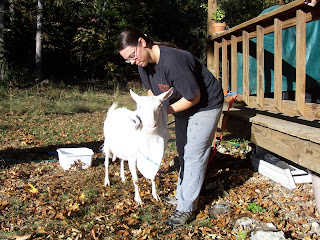