Went to Shut up the Chickens.  Or, in other words, I went outside to shut the door to the chicken coop & to make sure all were inside safe & snug.  As it was already dark, I had my handy-dandy flashlight with me and did a sweep of the immediate area near the goat / chicken coop.  And peering out from under the coop were two shining green eyes.  Of course, I always forget to bring a firearm with me.  I know I should make it a habit but I’m either too lazy or just forgetful.  Anyhow, I jog back to the house, grab the .22 and head back out to the barn where those green eyes are still staring at me.  We haven’t had any raccoons or opossums lately – at least none that have taken to snacking on our poultry so I was a bit surprised.  I make sure I know where all the goats are – they’re all in the corner of the goat pen as just about anything freaks them out – then duck down to get a better look at exactly what kind of animal is crouched under the barn.  It runs out & scales the fence like nothing.  Kind’a weird.  A raccoon isn’t that fast & the opossums just kind of pace back & forth on the fence line when encountered.
So I go back in the house and trade the .22 for some pieces of leftover chicken to put in the live trap.  Before I can set the trap, the green eyes are back, but this time just outside of the pen.  And they belong to a small cat.  Now what am I supposed to do?  I’m not going to shoot a cat unless it was a bobcat and even then I feel really, really badly about it.  Why am I such a sucker for cats?  Why is it any different putting a bullet between the eyes of a opossum than it is of a stray feline?
So I set the trap with some chicken, scatter some pieces around the trap & take another look-see around.  The cat is now hiding under one of the trucks.  So I do what any feline fanatic would; “Here kitty, kitty, kitty”.  Nothing.  But it’s not running away.  “Here kitty, kitty, kitty” and I move a bit closer until it scoots out from under the truck into the woods.  At almost the exact same time I hear the scream & hoot of our local Barred Owl.
What to do now?  Being a self-proclaimed crazy-cat-lady I have several things going through my head.  I hope that s/he gets trapped before the owl makes a snack out of it.  But then what?  Do I take it to the local “humane” society (where they will probably eventually put it down anyhow)?  Ask around if anyone wants a stray cat (very unlikely)? Try to tame it & keep it as a barn cat?  Paul is already giving me the “eye”.  Meaning “I’m going to divorce you if you bring in any more stray animals”.
I’m actually a bit surprised that we haven’t had any strays dumped here already.  It seems that’s just what people do around here; find a stray animal, chuck in it the pickup truck, take a little drive to the outskirts of town & dump it down a dead end road.  This fits the description of our place exactly.
We, or rather I, have a 14 year old indoor cat and two 3-5 year old indoor / outdoor cats.  The in/out cats basically go in & out of the house – like six million times a day – but are kept inside at night.  I know that we have some mice in the barn so it WOULD be nice to have a cat in the barn.  I could keep the cat food and water in the barn & I could also lock it up at night with the rest of the goats / chickens so everyone would be safe & warm.  Assuming that it doesn’t eat the chickens.  Or freak out the goats.  Or the other in/out cats get in a fight with it.  Or I become attached and want to bring it into the house.  At which point I will be homeless because Paul will have kicked me out. 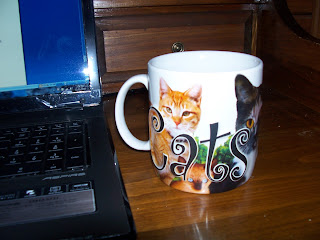