Well, it took less than an hour to catch the stray cat in the live trap last night so I set up one of the animal crates in the garage with litter, food & water & let him out of the trap into that.  At least there’s more room in there & a bit warmer.
I called the local Humane Society this morning.  They only take strays that are in the city limits & told me to call the county animal control.  How nice.   I called the county animal control & they said if it’s wild they just take it to the vet & put it down.  Well, it’s definitely not sitting on my lap purring, but what cat would be after being dumped off, hungry, tricked into walking into a metal trap & then put into another cage in an unfamiliar area.  I’m going to spend a little more time with it when Paul’s home to watch Rhiannon & see what happens.  It’s eaten some more chicken & cat chow & last I checked was sleeping on the pile of towels Paul put in the crate.   I still have to call the local vet offices to see if anyone is looking for a barn kitty and I’ll put an ad in the local paper.  Basically a shot in the dark, but you never know. 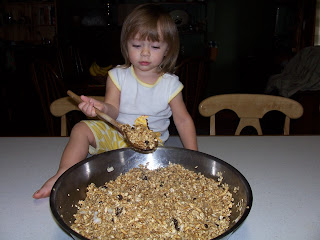 I usually make the granola with a honey / maple syrup solution, but I wanted to try making my own sugar syrup.  As usual, I didn’t use any recipe so I just dumped a bunch of sugar, molasses and a little bit of water in a pot & heated it up.  Added some veggie oil, a bit of vanilla, some honey powder, dumped it all in the huge bowl of dried ingredients and stirred away.  Put it in the oven for about 40 minutes at 275 degrees & stirred once in a while.  Guess I didn’t let the syrup mixture heat up enough as there were still sugar crystals present in the mixture.  Oh well, it still tastes good.  Can’t wait to make some yogurt so I can sprinkle granola on top.  Or just eat it with some milk.  Or put it on some ice cream.  Or as a topping on cobbler.  Or pie.  Or……..
Posted by Carolyn at 2:20 PM