I've been busy. Really, I have!

Not that I really have to justify my reasons for not blogging, but it makes me feel a little less guilty if I can make a legitimate excuse.
For those of you who haven’t heard me complaining (or screaming) about the lack of “proper” floor coverings in the living room & bedroom, I’ll give you a synopsis:  When we bought this house five years ago, the inside was pretty disgusting.  The previous owners had cats, not because I knew them, or saw said felines, but because the owners left buckets of used litter & other such tell-tale clues inside the house.  This included stained & practically saturated carpeting.  I hate carpeting.  I hated carpeting before this house, but this just made my irrational hatred towards an inanimate object even more intense.  So the first thing I did was to rip the carpeting out of the entire first floor.  And when I say entire first floor, I mean that to include the kitchen and bathrooms.  Come on.  Who puts carpeting in a bathroom?  And this was the really thick carpeting.  Yeah, I know it feels real soft & fuzzy on your feet in the winter, but for goodness sakes……pee gets on the carpet in the bathroom – I don’t care how careful you are about your aim – pee still gets on the carpet!  Ok, I've finished venting.  And I apologize if some of you have carpet in your bath or kitchen.  If it works for you, great.  But it obviously isn’t for those of us who are either not very clean, or have animals & live on a farm.
When the carpeting was gone, we realized why it was probably put down in the first place (besides being cheap).  There is a hump in the middle of the house going from one end to the other.  Putting anything other than carpeting down would mean that the main beam of the house (the cause of the hump) would have to be fixed.  And as we soon realized, that was not going to be an easy, or cheap, thing to do.  So between a mixture of procrastination, lack of funds and general heated arguments between Paul and I, the floor remained pretty much the same as after the carpeting-exile.  At one point I painted the floors so it didn’t look so hillybilly-ish, but it still looked like, well, painted plywood underlayment.
So, to continue telling you about exactly why I haven’t been blogging…..
I finally bought some laminate flooring & started installing it in the bedroom this week.  I’ve always liked the idea & look of real wood flooring, but after much deliberation and some of my own testing (i.e. gouging, cutting, scraping, setting aflame) of the materials, I figured the laminate was the way to go.  It’s a wide-plank “hand-scraped oak”.  It’s slow going as I’ve never done it before, but it isn’t rocket science.  After it’s been in for a while, I’ll decide if we’re going to put that in the rest of the house.  Hopefully it won’t take too long. 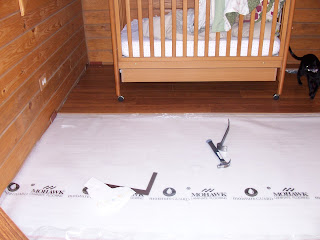 Installing flooring wasn’t the only thing going on here.  One of Paul’s co-workers was nice enough to give us a box of pears so I canned them and got eight quart jars.  I can never pack them tight enough to avoid such a large “empty” space at the bottom after they’ve been processed.  I wonder if I should just smoosh them in the jars, but I’d hate to bruise the fruit in the process.  I used a light syrup to pack them in (one cup sugar for every two cups water) and water bath canned them for 30 minutes.  I’d like to try and make some spiced pears if we are lucky to get any more & have them for Christmas. 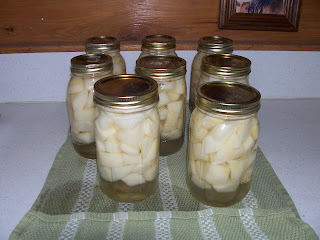 Since we’d been pretty busy, I hadn’t defrosted anything from the freezer for dinner so I made homemade corn dogs.  I haven’t had a corn dog in years so I thought it would be a nice treat.
Corn Dog Batter
1 Cup Flour
1 Cup Cornmeal
1 teaspoon EACH, Salt & Baking Powder
4 Tablespoons Sugar
2 Eggs
3/4 Cup Milk (I put in just a bit more)
Take your hot dogs, cut them up now if you want smaller ones, then dry them off.  Put them in a bag of flour, shake it up then brush off almost all of the flour.  Dip them in the batter & fry them in a pan of oil until browned then place on a paper towel lined plate and enjoy!. 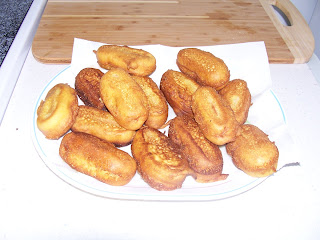