Getting ready for tomorrow’s feast.  I made three, yes three pies.  Or cakes, or whatever you want to call them.  There are only going to be five of us here tomorrow for dinner and one of us is under two years old.  Somebody’s going to end up in a sugar-induced diabetic coma.


Goat Cheese Cheesecake.  As we’ve had a surplus of goat milk / cheese here on occasion, I’ve found several recipes for a “ricotta” type cheesecake to use up our excess cheese.  This one is darned near simple enough for a two-year old to make.  3 cups of fresh goat cheese (a ricotta-like cheese I make using vinegar to set the curd & then just strain it), 3 eggs, 1 cup sugar, 1 Tbsp. vanilla, 1 tsp. lemon juice, ½ tsp. salt.  Mix it all together ‘till it’s fluffy & scoop it into a pre-baked pie shell or graham cracker crust.  I used a basic pie crust recipe with the addition of some sugar & cinnamon.  Think I may top it off with some blueberry compote or maybe a cranberry syrup tomorrow before serving.
Pecan Pie.  I always disliked it when there was too much “goo” in the pie and not enough nuts.  Come on, it’s PECAN pie, not goo pie.  I use the recipe in The Joy of Cooking but instead of just one cup of pecans, I put in two cups.  I used a basic pie crust for this.
Apple Something-or-Other.  I had made a double batch of the sweet pie crust for the cheesecake, so I had a ball of the sweet dough left over.  And I couldn’t just let it go to waste.  And the chicken bucket on the counter was full of stuff so I couldn’t put it in there without having an overflow problem.  And the dog just ate so I couldn’t give it to her.  And if I put it in the freezer I would more than likely forget about it.  Ok, I admit I was just looking for some other yummy thing to make.  So I baked the pie crust & went about looking for something to dump into it.  Found a jar of apple pie filling I canned two summers ago then topped it off with a crumbly crust made from melted butter, oatmeal, sugar, molasses and cinnamon.  Then just popped it in the oven to crunchy up the topping. 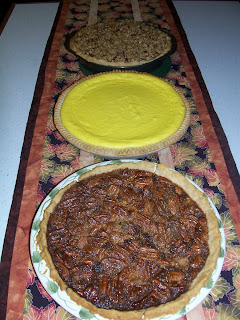 I hope these can make it through the night!
Posted by Carolyn at 7:08 PM