Yesterday was the first official day of cooking without using my oven or range.  Since it’s been like a million degrees outside and the house is only slightly cooler, I figured it was better to discontinue using the oven and range.

We had steaks, canned corn, sautéed onions & mushrooms and flatbread for Supper.
The flatbread is basically just an herbed white bread dough, rolled out thin.  I generously brushed olive oil on the sides that were on the grill, brushed some more oil on the top and sprinkled some parmesan cheese on it right before I took it out of the grill.  Next time I’ll slice some zucchini, onions and tomatoes really thin and put them on top of the flatbread while they’re grilling. 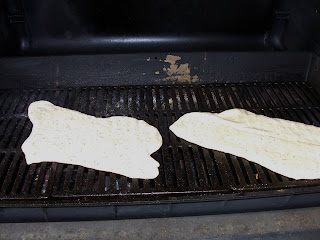 The white blobs on the grill are the flatbread. 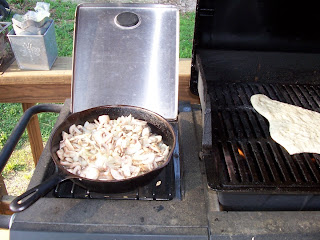 Having a side-burner is a great help when cooking on the grill.
After the steaks were done (in like forty-five seconds.....I like my steak to “Moo”), I kept the burners on low / medium on one side of the grill to keep the temps around 400 degrees, flipped an old cake pan upside down on the non-burner side, then placed my loaf of bread (half of the flatbread recipe, but left to rise) on top of the cake pan.  ﻿ 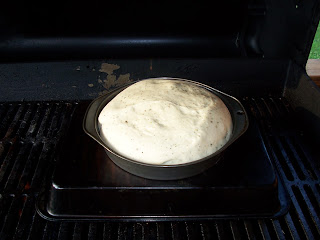 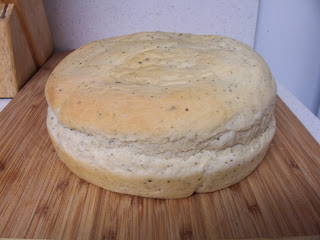 I’m happy to say that I will still be able to bake bread without turning on the stove inside!

We almost finished off an entire jar of pears for dessert; another no-heat option.  These were the pears that one of Paul’s co-workers gave us last year and I canned them up.  They were DE-licious!


Now I have to think of what to make tonight!
PS – Susan, would you please email me your “secret” fix so I can post comments again?  Thanks!  CarolynRenee@centurytel.net
Posted by Carolyn at 6:06 AM