Paul scraped another garden area for me a few days ago and planted the remaining squash and tomatoes I started from seed. 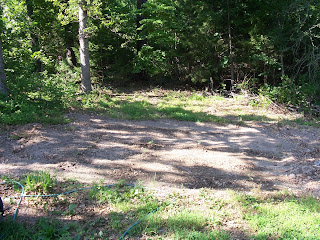 Rhiannon and I also dug in a row of black oil sunflower seeds just for the heak of it and they’ve already started to push through the dirt, in like three days!  Talk about almost-instant gratification! 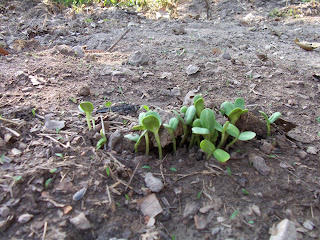 Rhiannon's "Dump a Bunch" method of seed sowing.  Think I'll need to thin 'em??
Not exactly sure what I’m going to do with the sunflowers as I’m pretty much certain the birds, deer, squirrels, raccoons (and with my luck, even the darned snakes) will be snacking on them before I can harvest any seeds.
Even though I had high hopes of having a large garden this year with plenty to can for the pantry, my ambitions weren’t quite matched by my actions and the garden doesn’t consist of much.  I also lost all twelve eggplants, twelve cabbage and about ten tomato plants due to the swamp-like conditions we had last month from all the stinking rain.  I suppose that means we’ll have a drought next month.  It’s too late to start tomatoes and peppers from seed and too hot to plant lettuce or spinach.  So I’m going to cheat; I’m going to buy some plants from the local nursery.
I don’t expect to find many varieties; probably the old standbys like California Wonder Peppers, Big / Better Boy Tomatoes and other hybrid vegetables.  Even though I’m probably going to end up paying close to $2 for a small six-pack cell of plants, I figure I’ll still be way ahead as opposed to buying stuff from the super market.
So if you had a bad start (or no start at all) on your seedlings this winter or didn’t have time to sow seeds directly in the ground (or the dog ran over your squash plants, the green worms ate your turnips down to nubs, the toddler pulled up half your peas while helping you weed), don’t give up!  Go to your local nursery or Big Box home improvement center and buy yourself a flat of vegetables.  If you didn’t manage to get that garden tilled under or fenced in, try planting them in containers.  Put them around the front porch where they will be easy to water.  Just plant SOMETHING!
Unless you really do like those high-priced, tasteless, pesticide-laden tomatoes at the Wal-Mart Supercenter.
Oh, by the way, I’m not ignoring your comments…..stupid blogger isn’t letting me comment again.  Anyone know if it's something fixable or do I have to wait for the blogger-gods to fix it?
Posted by Carolyn at 4:38 PM