I had one of those moments yesterday.  You know, one of those that hit you like a brick upside the head.  The kind of idea that says, “What’s wrong with you that you just now figured this out?”

Rhiannon and I were watering the gardens yesterday morning.  Well, I was watering the gardens while Rhiannon was watering the dog, the cat, the tree trunk, the porch, the rocks, etc., when I was standing on the side of the house where our new temporary garden is.  It’s not the best location as there are a few large trees that shade the garden during the day, but it’s what Paul scraped up for me and heak if I wasn’t going to use it.  Anyways…..
With the exception that this area doesn’t get quite enough sunlight, and the soil pretty much sucks, I like it because it’s close to the house and it’s just about thirty feet from the water faucet on the side of the house; which I suppose is the only good thing going for it now.  Watering, which I absolutely hate doing, is much easier when I don’t have to mess with dragging a hose around too far.  Then I started thinking how nice it would be if there was a garden right here: 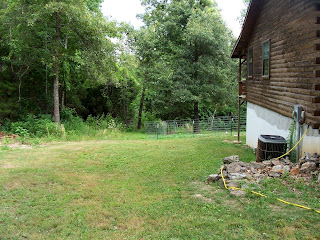 This side of the house is pretty much covered in plantain, clover and some grasses.  It gets a LOT of sun in the summer as the shadows from the trees don’t really touch the area because of the East / West  orientation although it does receive some shade in the winter as it’s on the north side of the house.
Wouldn’t that be a great place to put some raised beds?  The area has a slope to it, so placing beds in a step-like manner would also stop some of the rain from rushing down to the back of the house like it does now.  Lots of sunlight and close to the water faucet!  I don’t know why I didn’t think of this before.  I suppose because it’s just the forgotten side of the house.  You know, the side that is just “there” and only serves for sucking gasoline in the lawnmower (when I remember to mow down there).
Can’t wait ‘till I tell Paul about my new gardening revelation!
Posted by Carolyn at 3:33 PM