Rhiannon, Grandma, Grandpa and I went to the County Fair this weekend.  The Midway is crammed with the standard carnival stuff; scary take-it-down & shove-it-in-a-trailer rides, overpriced funnel cakes and shaved ice and odd looking carnival folk.  There are two or three buildings that house the usual crafts like quilts, paintings, woodcarvings, Kleenex boxes made from yarn and that plastic grid stuff, and my all-time favorite, the crocheted “Southern Belle” doll that holds a roll of toilet paper under her skirt.  Actually, I abhor those things…..just too freaky looking for me.


But on to the animal exhibits!
I love seeing the livestock, even if they are all crammed into small cages and are probably sick of people poking fingers in their cages and having flash photographs taken of them.  I walk up and down the aisles in the poultry building and make mental notes of which new breed of chicken I will get next spring. 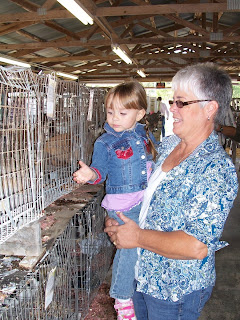 Rhiannon & Grandma checking out the "contestants".
Although somewhat disappointing, the goat section of the barn is usually populated with less than a dozen goats, some of which I’m not even sure are purebred (not that I’m being snooty, just thought they had to be).  There were some Alpine looking breeds, three Boers and a Pigmy I think.  And all with horns.  I thought that dairy goats weren’t allowed to show with horns.  Oh well.
I also like seeing the cattle.  It just amazes me (and occasionally frightens me) when you see an eight year old girl leading a steer around the arena.  They aren’t full grown steer, but still something that could easily crush a Volkswagen beetle.  Last year we saw a little girl sitting on her steer, reading a book. 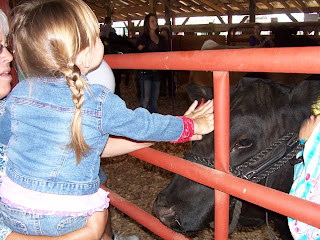 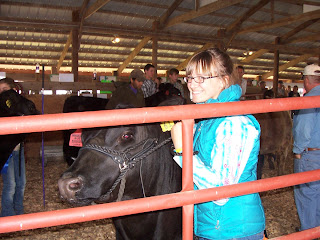 The nice young woman who let Rhiannon pet her "pet".
Although I like to use Rhiannon as my excuse for going to the County Fair, I did have an ulterior motive for going this year: 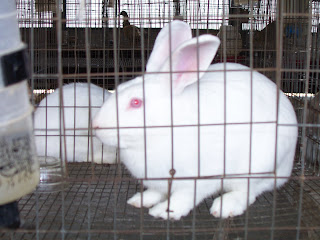 Rabbits!  New Zealand, to be exact.  Ever since I’ve had the opportunity to somewhat reduce our wild rabbit population last winter (bastards were chewing on our fruit trees), I’ve been dreaming about starting a small flock.  Well, not “flock” exactly, but I don’t know what they call a bunch of rabbits.  Somebody let me know; if I'm going to be raising the buggers, I should at least learn the nomenclature.
Dressing out a rabbit has got to be the easiest animal to prepare for the supper table.  A few slits around the back legs, pull the skin down over the head, eviscerate, and lop the head off.  I’ve never, ever butchered something so easily or quickly.  I’ve baked two rabbits, but wasn’t too happy with the results; too chewy.  Not sure if it was me or the rabbit.  The others I put in the pressure cooker with some veggies and spices and just picked the meat off; it was mouth-watering.  And these were wild rabbits!  Can you imagine how much larger and meatier the New Zealand would be?
So for the past few weeks, I had been secretly planning where I was going to put the rabbit cages (which we already have three of for raising small amounts of chicks) and what type of watering / feeding system I was going to use.  I say secretly because as many of you may have already guessed, Paul was not aware of my scheming or he’d of nipped it in the bud before I got the words, “I’ve been thinking about getting some Rabb…..” out of my mouth.
Well, after we walked ourselves tired of the Fair, and after making one more visit to the Rabbit Barn, I left empty-handed.  And not just because there was only one New Zealand there (I was hoping for a breeding pair).
It’s because I already have too much on my plate at home.  Ms. Melman and Nugget (the mule and mini-horse) are still up the road as we still haven’t finished the pasture and fencing here.  Even though I have drastically reduced my goat numbers from earlier this summer, they are still time consuming.  The laying hens still require time to water and feed and I have twenty-five Cornish Cross chicks and twenty barnyard mutt chicks to care for.  Not to mention the occasional mucking out of stalls, cleaning up wasted hay and attending to other unforeseen events around the barnyard. And that’s just the livestock!
So the only thing we left with from the County Fair was a fried pie for Rhiannon.
But I’m glad.
And there’s always next year.
Posted by Carolyn at 7:09 AM