We had a few friends over yesterday morning to help us butcher the remaining Cornish birds.  Paul and Les did the actual “deed” while Johnny and I were in the kitchen awaiting  the plucked birds in order to finish processing them.
WARNING: Although there were no actual killing / butchering pictures taken, this IS a long & boring post!

So this is how we get those yummy birds onto the dinner table:
A line is strung from two close trees and at about 6' high.  From that line we hang several 1' lengths of bailing twine (what can't you use that stuff for???) with slip-knots on the ends. 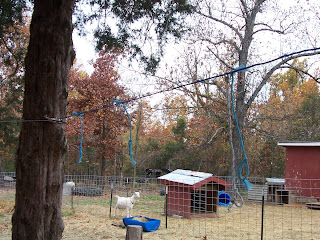 Directly underneath is a blanket of wasted hay to catch any blood and feathers so when we’re done it can just be raked up and put into the compost heap.   Paul made a butchering bucket from a used blue plastic 55-gal drum by cutting about a third of it off and cutting handles on two sides.
This particular bucket is used when we butcher just about anything;  deer, goat, chicken, whatever.  Very nice to have as it’s durable, light enough to easily move around, and easy to clean.
We have a large pot and propane burner (think turkey-fryer) that we use to heat up the water for scalding the chickens.

The water is brought up to 150 degrees and a squirt of soap is added to help penetrate between the feathers.  While the water is coming up to temperature, Paul and Les will each grab a bird and hang it by the feet using the bailing twine.  The birds will hang upside down a minute or two until they calm down.  Pull down on the head by the beak (or if it’s a rooster, by the wattle & beak) but not so hard as to dislocate the neck, just enough to keep it steady so you can make the cut.  A cut is made on one side of the neck, from almost the middle of the neck to the ear, just under the jaw.  You just want to cut the jugular, not lop off the head.
After the cut is made, the birds will usually just kind’a hang there while the blood drains (into the blue bucket), but just when you think they’re “done”, they’ll flap around for a while.  This is where a killing cone would come in handy.  Les had made one for us this weekend, but it was too wide and the birds managed to flop out.  Hopefully we’ll have one by next spring when we plan on raising another twenty-five birds.  Depending on how much flapping occurs, you may hold the bird’s wings next to the body so it doesn’t dislocate a joint or splatter blood everywhere.
Once the bird is really dead (as opposed to almost dead) and has stopped flapping around, Paul / Les will take it off the line by the feet and plunge it into the hot water, dunking it up and down and swishing it several times to get the water to penetrate through the feathers and to the skin.  This may take maybe a minute.  The bird is ready when you can easily pull the tail feathers out.  The bird goes feet-first back onto the slip-knot and the feathers are stripped away.  If you got the temperature right, you can just run your hands down the bird and the feathers will easily come off.  Of course there is still some plucking to do for the stubborn feathers, but it beats plucking a dry bird.
Once the birds are relieved of most of their feathers, the head and feet get cut off and the bird goes into the kitchen where Johnny and I are drinking tea and eating cinnamon buns patiently waiting to start our part.
Johnny makes a cut around the anus and a slit from there up to the bottom of the breast bone/cartilage, just under the skin and through any fat; not too far or you’ll puncture an intestine and have a mess.  He basically then jams his whole hand in there, grabbing as many internal organs as possible and yanks them out.  If everything was pulled out clean (no busted intestine or broken gall bladder), I’ll grab the liver and heart out of the pile of innards, cut it away from the connective tissue, rinse it off and put it in a bowl of cold water.
Paul yelled at me for not saving the gizzards from Sunday’s butchering.  Yes, I know, we could have fed them to the dogs, but Johnny and I were working so quickly and smoothly I didn’t want to ruin our groove.  Besides, serves him right for not saving the chicken feet for me.
Johnny will then cut the neck off and either quarter the chicken or pass it to me to finish cleaning out the inside.  If he quarters the bird, the backbone gets put in a pile with the necks and is saved and frozen for chicken soup later on.  I put the clean bird (either quartered or whole) in a plastic bag, wrap it again in plastic wrap and then into the freezer.
By the time we’ve finished, the guys are bringing in another two birds and the process begins again.
We did fourteen birds in less than three hours.  Definitely not record breaking speed, but there was a lot of gabbing, blowing and chasing bubbles (Rhiannon was at least) and visiting going on as well.  After everything was cleaned up, we sat down to a late lunch of homegrown smoked chicken, homegrown butternut squash, homegrown yellow beans and baked potatoes (store bought).  Homemade pineapple upside down cake for dessert and we were all ready to plop down on the couch.  Which I did.
Not sure if you guys read my blog, but thanks for all the help Les & Johnny!  Even you Timmy! (Somebody without blood or feathers all over their hands needed to bring beverages to the others.)
Posted by Carolyn at 9:44 AM