The weekend before Thanksgiving, I hosted a Swap Party.  Clothing and household items swapping party, mind you.

You weren't thinking something else, were you?  (Sorry MamaTea, but I figured you'd be the first to pipe up about that.)

After my light bulb moment came, I did do some online searching on Swapping Parties (and let me tell you, not all swapping parties are household goods related....wow!). Apparently I'm not the only one with this idea (swapping material goods, not well, other non-material goods); although the websites I visited seemed to be geared towards the more "affluent" types of Parties with high-end clothing, purses and accessories. There were all kinds of etiquitte for the parties and rules. Which I could understand would be needed if you made a big production out of it and invited a bunch of people likely to bring pricey items, but since I only invited close friends, I didn't really worry about two participants fighting over a dog-eared paperback romance novel. Guess some of these high-faluting Swap Parties can get pretty sophisticated.

Two weeks before the event, I called several of my friends and told them to get their "To Donate" boxes out and start filling them.  Everything that could be brought into the house without the use of a forklift was welcome; clothing, nick-knacks, costume jewelry, books, DVD's, kitchen gadgets, etc..
The day before the Swap Party, Mom and I cleaned up the living room, dining room and kitchen and put up an extra side table to display the "goods".  I made a trip to the store and bought some lunchmeat, cheeses and little sandwich rolls along with a bottle or two of wine.  Made some last minute cheese dips for more munching and two kinds of wheat-free cookies for dessert.

When Swap Party Day came and the guests started arriving (only half a dozen of us) we displayed our goods on the open tables, side tables and countertops.

There was much merry making, munching, some drinking of wine and laughter.  Some of the gals went home with an item or two, but others left empty-handed.  Not because there wasn't a lot of neat stuff to choose from, but I think that the real benefit from this "Swapping" party was to clean out closets and drawers of old or unused items.  Which is fine.  That's how I came upon the idea; I was cleaning out MY stuff and thought that it would be neat to give somebody else a chance at taking home some of my junk treasures before sending it to the donation site.
After the wine was finished off  items had been rummaged through and everyone was happy with their loot (or lack of), everything was boxed up to be sent to the donation site.

Besides being a wonderful afternoon of visiting with friends, it was a nice feeling to have several boxes of stuff to take to Goodwill just in time for the Holidays.
So, exactly what did I get from the party?

A drinking game called Partini (which I gave to Christine, even though she doesn't drink....I don't know why I took it, moment of weakness I guess and will probably end up in the next Swap Party).

And this little guy (because Rhiannon fell in love with it): 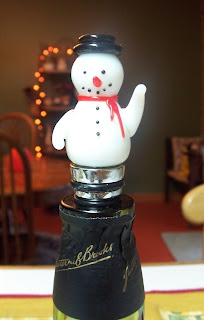 But the best thing I got was some much needed closet space!
Posted by Carolyn at 6:47 PM