Technically the recipe I’m going to share with you is neither very inventive, nor requires the use of an oven (as mine is still out of commission) but since I just made this taste-bud discovery I figured that maybe somebody else out there in the universe has also been missing out on this easy-peasy snack.

Oh, and did I mention that the recipe isn’t really a recipe per se, but a “little of this” and “a spoonful of that”?  Gawd, did I HATE those kind of recipes when I was younger!  But I guess as one gets older finds herself comfortable in the kitchen, the recipes are just like guidelines anyhow.  Right?  Right.

Actually, I’m just making an educated guess of the amounts I actually used.  But anyhow, I glopped everything into a 4-cup Pyrex measuring cup (my favorite container of choice for whipping up small batches of stuff) and whipped it all together using an electric hand mixer until it was nice and fluffy.

Half of it was devoured with two cut-up apples alongside our afternoon tea.... 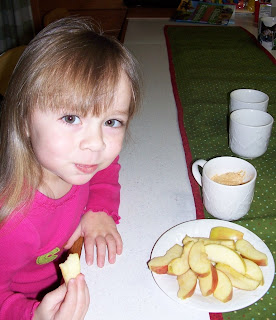 and the other half was put into a container for more tea-time dipping tomorrow.  Maybe with celery or carrots instead.