....can you smell it?  You know, the cool, crisp morning air.  The smell of burning leaves. 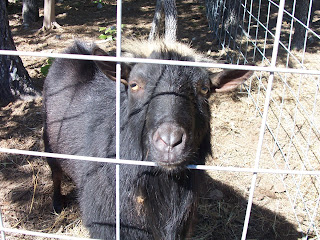 And he's just as smelly as I remember.  He's also gotten bigger.  Not sure if the guy we gave him to fed him better or if he finally reached his full size while away. But he is definitely meatier.

It's about time to have the goats bred, and we needed Pan back for breeding Annette.  I'm still up in the air about who I'm going to have breed Nettie.  So we went to pick up Pan yesterday and put him back in his old pen.  The girls weren't too keen on seeing him, so I'm assuming that I already missed their first heat cycle.  Both Nettie and Annette were unusually vocal about a week and a half ago, so maybe that was it.

Pan, of course, is ready for action.  Pissing on himself and making the back 40 stink to high heaven.  I haven't had any interactions with him yet other than feeding & watering him so there hasn't been any goat wrestling on my part.  And honestly, after Annette is bred, the only wrestling happening will be me cramming his sorry butt into a crate to take to the sale barn.  I am not going to put up with any of his shenanigans this year.  I almost broke a wrist trying to wrestle him to the ground last year.

Yes, it's convenient having a buck on site.  If we have our own buck, I don't have to worry about contracting any nasties from another herd.  It's much easier to tell if the does are in heat.  And I don't have to haul the girls to another farm in order to be bred.  But then I have to take care of the buck for an entire year.  Feeding, watering, medicating, hoof trimming, etc.  I used to scoff at a $75 stud fee, but now I know better.  It's well worth the money if I don't have to screw with a piss-reeking goat with a serious Napoleon complex.

So, if you want to come visit our place, just go South, take the first right past the county line and follow your nose.  Either that, or just listen for the screaming baby goat.
Posted by Carolyn at 7:17 PM