I had planned on having the Cornish cross meat birds arrive two days after my homegrown incubated chicks were to hatch so I could put everybody in the same pen and brood them all together.

The eggs in the incubator are supposed to start hatching Tuesday (tomorrow): 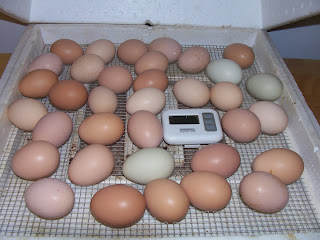 But look what I had to pick up at the feed store last Thursday: 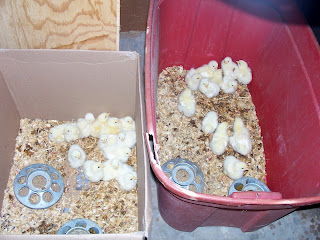 Needless to say, I wasn't too happy about the early arrival of the creepy-meats as it messed up my carefully thought out plans.  But I took them anyhow as the feed store guy said he wasn't sure if they would be getting any more chicks and I didn't want to have to scramble around to find our future chicken pot pies.

So basically, the Cornish chicks will be a week older than the barnyard mutts I'm hatching out and since the Cornish are notorious for growing very quickly, I'm sure that they will look like monster-chicks compared to mine.  I guess I'll have to separate the two broods for a while until I feel everyone can get along without too much pecking and picking.

The older chicks are still being cared for by two hens.  Technically there should be three hens taking care of chicks, but one flew the coop after three weeks and left her offspring alone in the pen.  Once broody hen number two hatched out her single chick, I put her and her chick in with the abandoned chicks and after a few days she adopted them.  The third broody hen and her two chicks were put in the same pen after a week alone.  So there are two hens and nine chicks in the large pen.  I'm still weary of letting the chicks out though as I don't have good luck with the little guys coming back in the pen or in the coop.  The mother hens usually end up staying outside under the barn with them at night and become opossum or raccoon midnight snacks.

Eventually I'm going to have to boot them out though as the Cornish birds will need to go in that pen as they outgrow the bins, then even the smaller pen.  Or maybe I can put them in the chicken tractor.  It hasn't been used since 2010, so I'll have to take a look at it.  Hopefully it won't take a lot to get it back to being 'coon and 'possum proof.
Posted by Carolyn at 7:18 AM