End of the Summer Garden

I’m sipping hot tea and donning a long-sleeved flannel shirt this morning while I type this.  It’s 6:30 in the morning and it’s a wonderfully cool 45 degrees outside.  I even glanced at the wood stove.  Should probably clean the dust of it.

I weeded the strawberry bed during my online sabbatical.  It was totally overgrown with spurge and carpetweed.  But I am totally convinced that my neglect of weeding out that particular greenery in my strawberry patch is the only thing that saved the plants from the scorching heat this summer.  The plants that were in the small section that I did relieve of weeds this summer dried out and died.  But the ones that were covered with weeds were thriving!  Although the weeds were so thick in places that I couldn’t avoid pulling some of the newly rooted strawberry plants up.  But I just saved those, put them in a bucket of water, then will (eventually) plant them in the bare spots where others had died.  These were the plants that my Mom gave me earlier this year.  I’m hoping that next Spring we will be eating our first real homegrown strawberries!
The other sections in the “Berry” garden were planted with summer squash, tomatoes, peppers and green & yellow beans.  The summer squash were just about finished so I pulled them up as not to give any wayward squash bug an easy meal.  I planted two more “Lemon Squash” a month or so ago and I’m just starting to harvest them.  I must say that even though my squash harvest was pretty meager by previous years’ standards, I was happy with it as by now I’m sick of eating summer squash anyhow.

The peppers are about finished too.  They did fair this year even with being planted late in the season and with the heat.  My tomato jungle is finally putting out some ‘maters.  As large as it has become, I would have liked to have bushels full of tomatoes, but the heat of the summer basically killed the pollen in the flowers and therefore most of the potential crop.  We’ve had enough for some fresh salsa and sandwiches, but none for canning.

The green and yellow beans were doing ok through the summer, but when I went to picking them I tried eating several of them (as one is prone to do when harvesting green beans), they were incredibly tough.  Couldn’t even manage to swallow them after much chewing and just spit them out.  I didn’t even want to bother trying to can them to see if it would make them more palatable.  So I just fed some of them to the goats and the rest I left on the plants to dry.  I’ll save them for seed for next year.

We got three cantaloupe from two plants.  The looked beautiful, but tasted awful.

Three watermelons from two plant.  One was huge, the others so-so.  We ate the large one yesterday and it was wonderful.  These were bought from the local nursery and I have no idea what type they are, but I’m saving the seeds anyhow and will scatter them in some of the composted areas next year and hope for the best.  Best is we get more great watermelons, worst is that they get fed to the chickens. 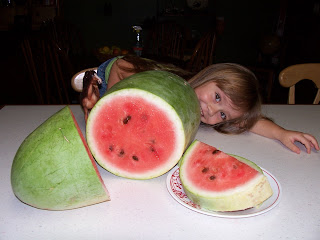 The six blueberry bushes netted a small handful of berries.

Five small peaches (but oh my, were they good!).

Not a single nectarine, apple or cherry.

Seven grape vines planted this spring yielded nada, but I didn’t expect anything their first year.

By far, the wild, unplanned or untended plants did the best for us this year even given the drought and heat.  I’ve been using the Lambs Quarters almost all spring and summer and I had a pretty good harvest of wild grapes.  The persimmon trees seem to be doing well so I’m hoping for another good persimmon harvest in October.

I wasted a LOT of water on plants that yielded nothing, slim pickings or inedible produce.  Should I have just cut bait and realized my gardening losses?  Probably.  But I’m still learning.  And it’s hard to give up on something that still has even a little bit of life left in it.  Lucky for us, we don’t depend on our garden bounty (or in this case, lack of) to carry us through the winter.  If it did, we’d be in a heck of a lot of trouble.  And much thinner.  But I consider this a learning experience.  A trial run.  An experiment.  One day I’d like to be able to provide all our own fruits and vegetables, but that is still in the future.  Hopefully in the near future.

And even though I’m way late for planting a Fall garden, I’m going to do it anyhow.  I debated starting one a month ago, but it was still insanely hot and dry and didn’t want to see my newly emerged seedlings die as soon as they pushed out of the soil.  We’ll put the plastic row covers on the raised beds once it starts cooling off so I should still be able to harvest some goodies before winter kicks in.
Posted by Carolyn at 10:26 AM