I like animals.  Probably too much, as Paul would readily attest to.

I like having a dog outside to alert us to any intruders (two or four-footed).  Unfortunately, Moonshine is at the point in her life that she is not only too rotund to get up and even fake-chase something, but even becoming rather complacent when it comes to other animals or people in the yard.

Two weeks ago, we had a canine visitor.  I usually "Shoo" away dogs as best I can, throwing rocks or even plinking them with the pellet gun if it warrants a more drastic intervention.  But this guy just wouldn't go.  And he was darned friendly.  So after realizing he was more than happy to stay, I gave in and threw him a dog bone.  I penned him up for a day and posted a picture of him in the local online petfinder and online paper.  No one fessed up to being his owner, but I did get a response that someone did in fact, know this dog.  And it's home base was several miles from here.  Apparently it's "somebody's" dog that just wanders around and apparently started wandering into new territory.  Meaning our front porch.

After keeping him penned up for the day, Paul and I walked with him around the yard.  He didn't seem interested in the chickens or goats.  Didn't give a lick about the cats.  If he did, it would mean an immediate trip to the pound.  He also seemed to be good with Rhiannon, although we didn't leave them in close proximity to each other without one of us being right there.  So that night I gave him a bowl of food next to Moonshine's.  No growling, no snapping.  Just happy to eat.  Moonshine even seems to get along with him.  Everyone went to bed and I expected to find him gone in the morning.

Except that he had made himself quite comfortable on the doormat on the front porch.  For four days.  We were becoming quite smitten with the bugger.  He barked when someone pulled up the driveway (but didn't charge) or if there were deer in the yard.  And other than having a few annoying habits like jumping and not knowing how to properly take a treat from your hand (he slobbers and grabs your entire hand, gently, but still not acceptable), he was a pretty good dog.  Rhiannon had even named him "Wallace".  And I had started thinking that we'd have to take him in to the vet to get him fixed and have shots given.  Man, that drives me nuts.  There are so many irresponsible pet owners around here that just get animals, let them wander, don't care for them and don't get them fixed.

But on the fifth day, he was gone.  I called for him on and off during the day, but I honestly wasn't going to make a big deal about trying to find him.  I figured he was just passing by.

This morning I opened the front door and saw this: 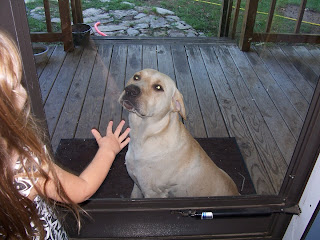 I debated going through whole "Shooing" routine.  I debated having Paul run him off.  But in the end I just gave him a dog biscuit.  I'm a sucker.

I don't know what we're going to do with him now.  Part of me wants to keep him as he seems like a very nice dog.  And we do need a "real" dog (sorry Moonshine) on the homestead.  But it's obvious that he's more than comfortable wandering the county and I do not want to be the owner of a wandering dog.  I've also been debating taking him to the vet to get neutered because it's the right thing to do, but should we have to shoulder the financial responsibility of fixing and vaccinating someone else's animal, especially if he'll just leave us in a week?  That's a $200 expenditure right there and we're not exactly poop'n out greenbacks.

So I'll be mulling over Wallace's fate here for a while.  Got to go now.  I think he wants a biscuit.