Anybody got an Ibuprofen?

Because I've got a splitting headache from all the noise. 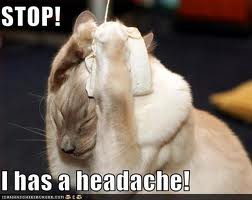 I'm currently weaning Pickles and she's down to one bottle of milk a day.  Every time she even thinks she hears the front door opening she screams like somebody is killing her.

The two new Boer kids are missing their herd mates.  And they are continually screaming.  Like somebody is killing them.

Annette is in heat.  She's tail flagging, mounting everyone that isn't smart enough to move out of her way, pacing the fence line where Pan is.  Oh.  And occasionally bleating out.  Like somebody is killing her.

And Nettie just so happens to be in heat as well.  She's tail flagging, laying down by the fence near Pan, and yelling like......well, you get the idea.

When I was milking / feeding Annette and Nettie last night, I noticed they were both getting sticky in the behind (isn't it amazing how intimately one gets to know the private parts of their livestock??).  So early this morning I brought a very willing Annette to Pan's pen.  Two good hits and she was done.  I love that about her.  She's a very no-nonsense kind of breeder.  She's more than helpful in letting you know when she's in heat and when I take her into the breeding pen, she stands still until a good connection has been made, then immediately wants to leave the pen.  Not that I blame her as Pan stinks beyond any literary definition.

Even though Nettie would be more than happy to get in a little goat luv'n with Pan, she'll just have to wait until her next heat cycle.  Not only because I'm still trying to secure a Saanen buck for her, but because I don't want to have two kiddings at the same time.  I like to have the kiddings spread out by at least two weeks so the new mom and her offspring have the large barn pen to themselves for that time.   After a week I'll open the pen door and let the kids wander around outside.  This also gives me several days to get the pen cleaned out for the next birth.

Wow.  Breeding season is here already.  And in five months, kidding season.  And spring gardening season.  Is there ever an off season for farmers?  Oh yeah, that would be winter.  Which I'm kind'a looking forward to.  Because it will be cool enough to get some of those outdoor projects started / finished that we didn't get done during the summer.