What was that I said about "No Horns"?

I'm just as bad as Lamb's husband at the feed store.

A FB Post seen by me yesterday afternoon: Lady has to move out of state for medical reasons.  Long list of equipment and farm and domestic animals that need to find new homes asap.  Horses, dogs, chickens, trailer, coop, etc. 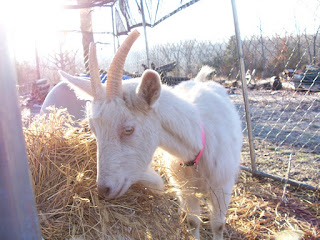 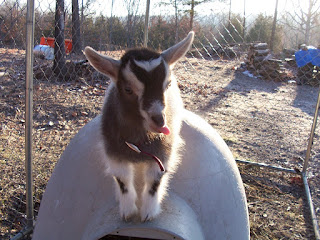 And I do mean little.  The woman advertised her as a Saanen, which I no doubt agree that she is, but only partially.  The other "part" was a Pygmy.  So I now have a Mini-Saanen.   Technically, Annette is also a Mini-Saanen, but her sire was a Nigerian Dwarf so she's actually bigger than the new gal.

When we first pulled up to the seller's house and saw one of her daughters leading the goat out of the pen, I was a bit disappointed because I really was hoping for a full-sized Saanen.  I had also hoped that her male offspring was a Saanen as I have yet to find a buck for Nettie and this would solve my problem.  Except the mother was bred to another Pygmy buck.  So the bucking is 3/4 Pygmy and 1/4 Saanen; not so much what I was hoping for.

So now do I not only have yet another goat with horns, but have her male kid who is three weeks old and too old to be disbudded.  I admit, I was immediately tempted to tell the lady "Thanks, but no thanks" when I first saw how little the goat was, but when she came up to us and I gave her a quick once-over, she was sooooo stinking sweet.  Her udder isn't as big as I hoped, but I have a feeling I'll never get another udder as huge as Nettie's.  And she looks like she can use some fattening up.  So I'm hoping that some grain and some lov'n will get her in tip-top shape.

She and her son are in a separate kennel and will stay in there for a few weeks until we can reasonably make sure that they don't have any problems.  I gave her & her kid a drench of Probios and she had a pelleted goat wormer for supper.  When we first got her in the pen and I brought her a bucket of water, I swear she went at the bucket like she was crazed and drank over a gallon.  Since I though she may have been dehydrated, I decided to hold off on the C&DT shots until today; not sure if there would be any problems with giving it, but I wanted to be on the safe side.

I'll milk her later on today and see how that goes.  When we first looked her over at the seller's house, she was fine when I was "groping" her udder to see if she was kicky or shy, but she just stood there like nothing was happening.  I thought I was going to have to wait another two weeks for milk from Annette, but it seems like fresh milk is in our very, very near future!

Paul's Take
Sighs and shakes head.
Posted by Carolyn at 7:54 AM